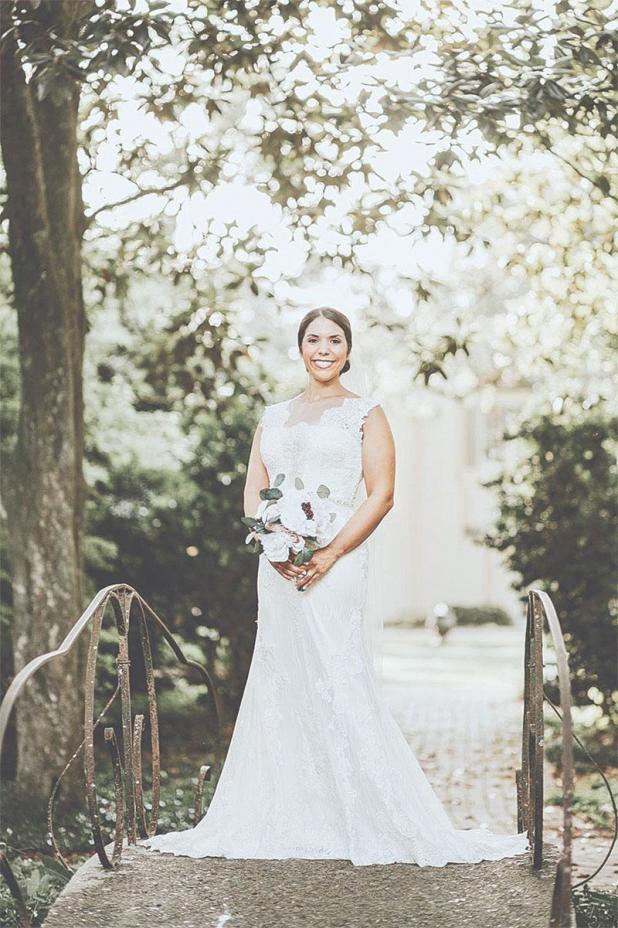 Alexandra Nicole Dardar and Christopher August Leonards were united in the Sacrament of Holy Matrimony during a 6:30 p.m. ceremony on July 26, 2019 at St. Edmonds Catholic Church in Lafayette, LA. Father Gilbert Dutel officiated the ceremony.
The bride is the daughter of Susan and Clayton Dardar of Abbeville, LA. Her grandparents are the late Mr. and Mrs. J. T. Trahan of Maurice, Louisiana and Mr. and Mrs. Oris Charles Dardar of Golden Meadow, LA.
The groom is the son of Don and Deborah Leonards of Eunice, LA. His grandparents are Mr. and Mrs. August Leonards, Jr. of Mowata, LA and Mr. and Mrs. Philip Joffery Brunet of Mamou, LA.
The bride wore a sophisticated and effortlessly glamorous gown found exclusively at A-Net’s Bridal Boutique. The modern lace sheath silhouette featured an illusion neckline, beaded belt, and lace cap-sleeves. The front details were equally matched with a stunning illusion back and ruched details. The bride’s look was completed with pearl buttons over zipper closure and a chapel length train.
The bride also wore a simple fingertip veil made of ivory tulle. She carried a bouquet made of Tibet white roses, bridal Akita roses accented with pink wax flowers and white lisianthas finished off with flowing silver dollar eucalyptus.
Serving as Maid of Honor was Hannah Dardar, sister of the bride. Bridesmaids included Regan David, Logan Doucet, Janae Theriot, Katri Richard, Kylee Fabre, Brittany Vidrine, Jessica Mendez-Martinez, all friends of the bride.
Addison Leonards, niece of the groom, served as flower girl.
The bridesmaids wore a wine colored floor-length dress with sophisticated side ruching and a one-shoulder neckline and carried a smaller version of the bride’s bouquet. The flower girl wore a floor-length sleeveless satin dress with a full tulle skirt. The dress was accented with an ivory bow at the waistline.
Serving as Best Man was Kevin Leonards, brother and Godfather of the groom. Groomsmen included James Leonards, brother of the groom, Joseph Corso, Wesley Chachere, Andrew Richard, Brennan Blankenship, Taylor King and Alex Young.
The ring bearer was Jack Leonards, Godchild of the groom.
Serving as Usher was Grant Dardar, brother of the bride.
Ceremony music was provided by organist Jude Gaspard. Processional pieces Trumpet was played by Will Green, Trumpet Voluntary by Clarke. Recessional Horne pipe by Handel and Vocalist was Rachel Gaspard. Musical selections included: When I say I Do by Matthew West, Always be a Child by Ray Boltz, Wherever you go by David Haas and How Beautiful by Twila Paris Ave Maria.
A reception was held at Warehouse 535 in Lafayette, LA.
The bride’s cake was a 3 - tiered, classically textured, white butter cream cake with adorned flowers to accent.
The groom’s cake was a 2 - tiered cake that was red and white in color and bursting with cajun pride with a Fleur De Lis topper.
The rehearsal dinner, hosted the grooms’ parents Don and Deborah Leonards, was held on the eve of the wedding at Chef Roy’s in Rayne, LA.
The bride is a 2011 graduate of North Vermilion High School in Maurice, LA, a 2014 graduate of the University of Louisiana at Lafayette with a Bachelor of Science in Business Administration, Accounting, as well as a Masters in Business Administration in 2016 and a Certified Public Accountant in 2017.
She is employed with Wright, Moore, DeHart, Dupuis & Hutchinson as a CPA.
The groom is a 2010 graduate of St. Edmund Catholic School. He attended the University of Louisiana at Lafayette and obtained a Bachelor of Science in Business Administration, Accounting in 2014 as well as his Masters in Business Administration in 2016 and Certified Public Accountant in 2017.
He is employed with Kolder, Slaven and Company as a CPA.
After a wedding trip to Jamaica, the couple will reside in Lafayette, LA.