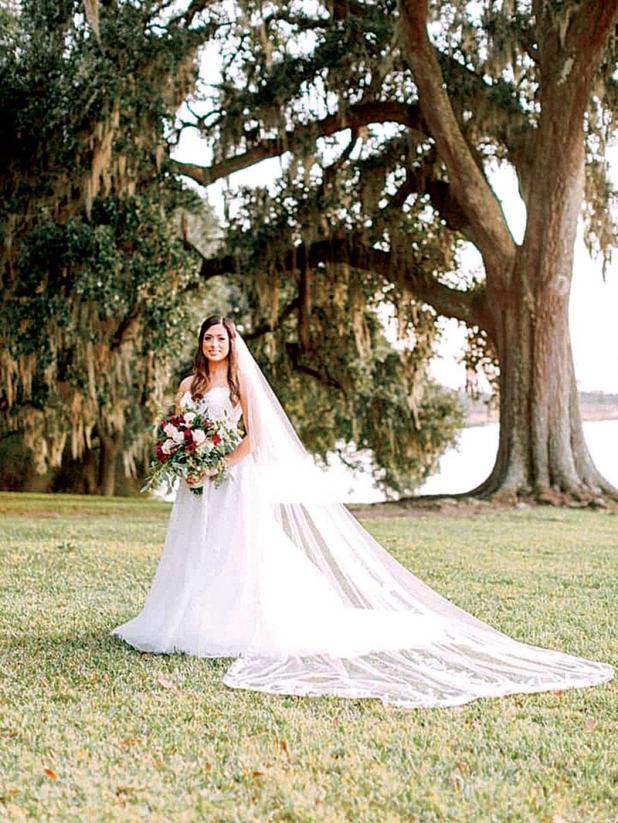 Brittany Marie Bourg and Caleb Matthew Zaunbrecher were united in a nuptial mass on Friday, January 3, 2020, at Cathedral of St. John the Evangelist in Lafayette, LA. Reverand Father Corey Campeaux officiated the 7 p.m. ceremony.
The bride is the daughter of Donald and Judy Bourg of Donaldsonville, LA. She graduated from Ascension Catholic High School in Donaldsonville, LA and is a graduate of Louisiana State University both for her Bachelor’s and Master’s Degrees. She is currently employed at the LSU AgCenter in Cameron Parish as a 4-H Agent.
The groom is the son of Matthew “Sam” and Sabrina Zaunbrecher of Gueydan, LA. and the grandson of Laura Zaunbrecher and the late Fred Zaunbrecher of Gueydan, LA.
He graduated from Vermilion Catholic High School in Abbeville, LA and McNeese State University with both his Bachelor’s and Master’s Degrees. He is currently employed by McNeese Center for Advancement of Meat Produciton and Processing.
Escorted by her father, the bride wore a strapless floral lace and satin A-line dress with a sweetheart neckline, tulle skirt with vintage-inspired beading with a cathedral train . She wore a cathedral length veil with floral lace appliques.
The bride carried a cascading bouquet of white roses with wine accents.
Serving as Matron of Honor was Brandy Kariach, sister of the bride. Bridesmaids included Camille Landry, Amanda Royer and Hannah Devall, all friends of the bride. Ryann Mae Hoffpauir, attended as flower girl.
Bridesmaids chose their choice of style in dresses which were wine in color, lace and chiffon. They carried a bouquet of white hydrangeas with wine accent roses. The mother of the bride wore a gray floor length dress with a floral lace bodice and 3/4 sleeves while the mother of the groom wore a floor length dress with a lace overlay and cap sleeves in navy.
Ethan Zaunbrecher, brother of the groom attended as Best Man. Groomsmen included Samuel Hoffpauir, John Peter Hensgens and Dusty Zaunbrecher, all friends of the groom. They wore navy tuxedo’s with wine accents.
Mason Karisch, nephew of the bride, served as ring bearer. Ushers for the ceremony included Garrett Meaux, friend of the groom and Lorenz Zaunbrecher, cousin of the groom.
Music for the ceremony was provided by Organist Melissa Lacour and Vocalist Nanette Rabalais. The church had Christmas decorations adorned at the altar with white lit Christmas trees, red poinsettias and red roses.
A rehearsal dinner, hosted by the grooms parents, took place on Thursday, January 2 at Don’s Downtown in Lafayette, LA.
After the ceremony, a formal reception was held at The Madison Banquet and Reception Center in Broussard, LA. The bride’s cake was a 4 tiered cake, simply adorned with white and pink roses. The groom’s cake had a cooking theme that showed the groom’s love of cooking with a cake made into a black iron pot of gumbo.
The couple will reside in Lake Charles, LA, after a wedding trip to Nashville, Tennessee.