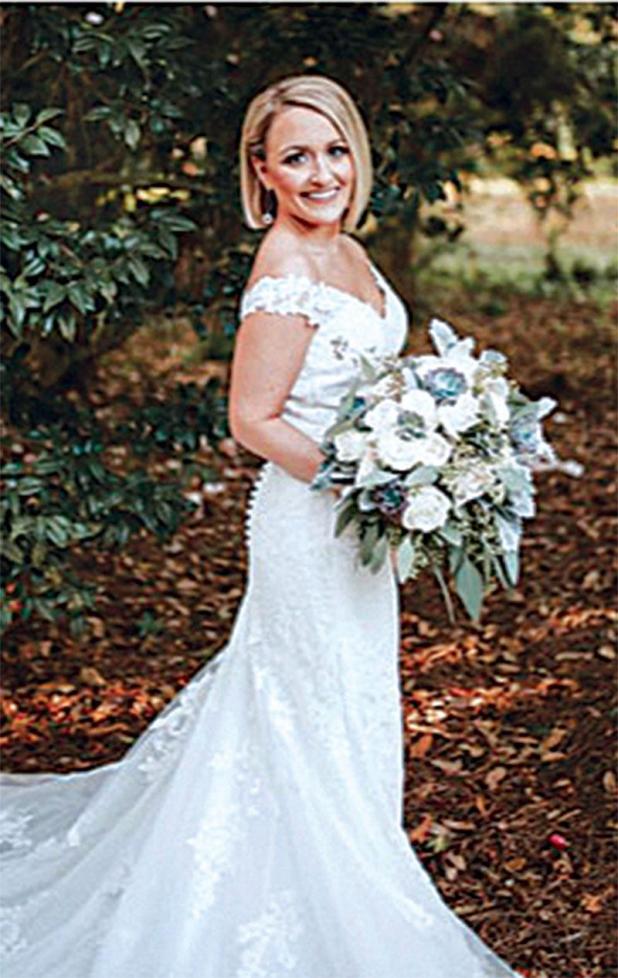 Morgan Alexandra Adams and Ross Paul Eason were united in the Sacrament of Holy Matrimony during an evening ceremony at the Cathedral of St. John the Evangelist in Lafayette, Louisiana on Saturday, May 4, 2019. The Reverend Andrew Schumacher officiated the ceremony along with concelebrant Reverend Neil Pettit.
The bride is the daughter of Ms. Candace Menard Kasperski of Kaplan, Louisiana. She is the granddaughter of Mr. and Mrs. Ravis Paul Menard of Kaplan, Louisiana. She is a 2010 honors graduate of Erath High School and a 2015 Magna Cum Laude Graduate of the University of Louisiana at Lafayette where she earned a Bachelor of Science Degree in Biology and was a member of Kappa Delta Sorority. She is also a 2017 graduate of Louisiana State University Health Sciences Center at Shreveport, Louisiana with a Masters of Physician Assistant Studies. She is employed by Our Lady of Lourdes Women’s and Children’s Hospital.
The groom is the son of Mr. and Mrs. Paul Lee Eason of Lafayette, Louisiana. His mother is the former Suzanne LeLeux of Rayne, Louisiana. He is the grandson of Mrs. Lucile Bechet Maroney, the late Captain James L. Eason (USAF), the late K.J. Maroney and the late Kathleen M. and Daniel E. LeLeux. He is a 2007 graduate of St. Thomas More Catholic High School, a 2012 graduate of the University of Louisiana at Lafayette where he earned a Bachelor of Science Degree in Kinesiology and was President of Kappa Sigma Fraternity and the College of Education for SGA. He is also a 2016 graduate of the University of St. Mary in Leavenworth, Kansas with a Doctorate of Physical Therapy and received the Distinguished Student Award from the Stefani Doctor of Physical Therapy Program. He is employed by Lafayette General Orthopaedic Hospital.
Given in marriage by her mother and escorted by her maternal grandfather, the bride wore a classic embroidered Morilee lace gown with soft tulle and a scalloped hemline with a fingertip length veil. The bride carried a bouquet of stems of flowing silver dollar eucalyptus nestled with white O’Hara and Pla’Oblanc garden roses adorned with succulents of different shapes and sizes and touches of dusty Miller tied together with a French satin ribbon. She also carried in her bouquet an heirloom antique diamond and platinum broach from the groom’s paternal great, great, grandmother, the late Laurence Lacaze Billeaud and a handkerchief from her maternal great grandmother, Ms. Anita Bell. The bride’s engagement ring is also an heirloom diamond from the groom’s maternal grandmother, the late Kathleen McBride LeLeux.
Serving as Maid of Honor was Miss Ali Kasperski, sister of the bride. Bridesmaids included Miss Analyse David and Miss Carly Stelly, both cousins of the bride, Mrs. Jenna Hebert Dunne, Ms. Kelly Lauren McDowell, Mrs. Julia Price Watts, Mrs. Kristy Langlinais West, and Mrs. Kasey Landry Wilson.
The bridesmaids wore different styles of Morilee gowns in deep sea. They each carried bouquets of hand tied silver dollar eucalyptus with seeded eucalyptus nestled with 3 white O’Hara’s adorned roses with succulents and blue thistle.
Serving as Best Man was Mr. John Peter Soileau. Groomsmen included Mr. Thomas Frederick, Mr. Eric Cade Gillespie, Mr. Wesley Matthew Johnson, Mr. Gerald Joseph McCloskey, cousin of the groom, Mr. John Murphy Rees, Mr. Stephen Charles Rees and Mr. Andrew Morgan Smith. Ushers included Calvin Isaac Gurney, cousin and godchild of the groom, and Mr. Thomas Shanley McCloskey of Sherman, cousin of the groom.
Serving as scripture readers were Mrs. Emily Segura Pitre, friend of the bride, and Mr. David Charles Eason, uncle of the groom. Gift bearers were Mrs. Brooke Menard Stelly, aunt and godmother of the bride, and Mr. James Harvey Domengeaux, godfather of the groom. Ceremony musicians included Thomas Niel, organist and musical director, Will Green, trumpeter, Lauren Baker, violinist, and Sasha Massey, vocalist.
Following the ceremony, a reception was held at Cathedral Hall where guests were entertained by the band, Jet Seven. The wedding cake was made by Courtney Dugas of Lafayette, Louisiana featuring four tiers of almond cake with almond icing and adorned with succulent flowers. Le Bon Manger’-Home of Chef Bobby and Dot of Kaplan, catered the food for the reception.
The groom’s parents honored their son and his bride-elect along with their wedding party at dinner on the eve of their marriage at the Petroleum Club of Lafayette.
After returning from a honeymoon in St. Lucia, the couple will make their home in Lafayette.