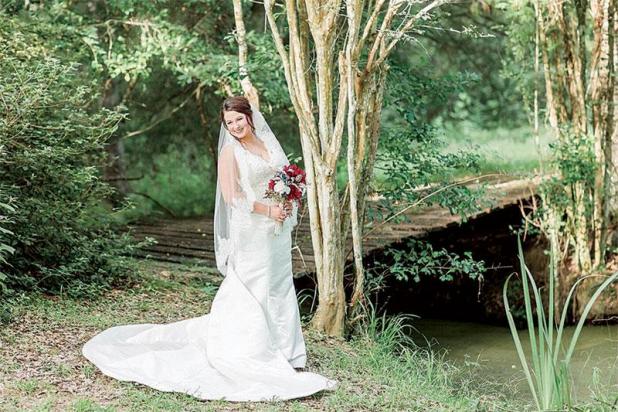 Bailey Sellers and Brendon LeMaire were united in the sacrament of Holy Matrimony on Saturday, October 12, 2019, at Woodlawn Chapel in Maurice, Louisiana. Pastor Steve Delino officiated the 5:30 p.m. ceremony.
The bride is the daughter of Malinda and Keith Sellers. She is the granddaughter of the late John, Sr. and Juanita Gaspard, Dudley, Jr. and Glenda Sellers of Abbeville.
The bride is a 2012 graduate of Kaplan High, a 2014 graduate of SLCC for LPN, and a 2019 graduate of LSUE with an associates’ degree in nursing, RN. She is employed as a Registered Nurse at Abbeville General Emergency Room.
The groom is the son of Melanie LeMaire and the late Clayton Courville. He is the grandson of the late Alede and Maria Courville, Gerald LeMaire, of Kaplan and Dorna Suire of Kaplan.
The groom is a 2011 graduate of Kaplan High and currently owns his own lawn service business, LeMaire’s Lawn Specialist.
Escorted by her father, the bride wore an ivory-colored gown with a beaded lace top and a keyhole back. The dress featured a satin bottom with rhinestone buttons that flowed down onto the train. She wore a short ivory English tulle veil with elegant lace at the ends.
She carried a bouquet of dahlia burgundy flowers with white roses and hints of blue and green wildflowers.
Serving as Maid of Honor was Tabitha Litwiler. Bridesmaids included Shayna LaSalle, Malorie Stoute, Taylor Wise, Shaylee Gaspard and Ceci Harper. They all wore long mesh wine-colored dresses with lace cap sleeves.
Ainsley Litwiler, daughter of Tabitha and Brad Litwiler, and Alexis Stoute, daughter of Malorie and Brandon Stoute, attended as flower girls. Ainsley wore an ivory-colored ballgown flower girl dress with a heart cutout on the back with a wine-colored belt. Alexis wore an ivory-colored sleeveless knee length flower girl dress.
Jacob Guidry attended as Best Man. Groomsmen included Coco Hargrave, Chance Hargrave, Clay Sellers, Ryan Mire and Brad Litwiler. Bryson Courville, son of Derek Courville and Randi Menard as well as John Clay Sellers, son of Clay Sellers and Lillie Broussard, served as ring bearers.
Ushers for the ceremony included Derek Courville and Gavin LeMaire.
Following the ceremony, a formal reception was held at Blacks, which featured rustic decor. The bride’s cake was a three-tiered half-naked french vanilla cake with pecan praline and cream cheese filling. The groom’s cake was a french vanilla sheet cake with chocolate truffle filling, with the groom’s lawn service business as its’ theme. The couple will reside in Abbeville, LA, after a wedding trip to St. Lucia.