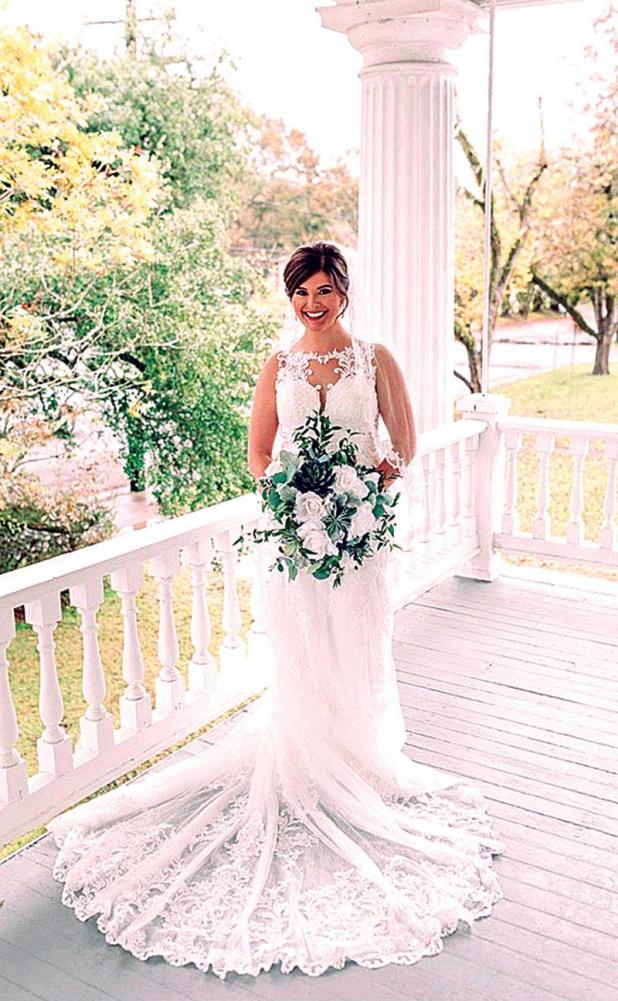 Miss Danielle Marie Hebert of Maurice, Louisiana and Dr. Jean’-Paul Abshire of Carencro, Louisiana were united in matrimony during a 7 p.m. ceremony on Friday, February 7, 2020 at St. Mary Magdalen Catholic Church in Abbeville, Louisiana. The officiant for the ceremony was Reverend Matthew Hebert, brother of the bride and concelebrants were Reverend Bill Melancon, Reverend Kyle White. Deacon of the mass was Deacon Byron Soley. Music for the ceremony was provided by Organist, Tommy Guidry and Vocalist Katelyn Gulotta. Musical selections were Jesu Joy of Man’s Desiring, by Bach for Processional and the Recessional piece was Te Diem, by Charpentier.
The bride is the daughter of Deacon Joseph Hebert and Angelle Menard Hebert of Maurice, Louisiana. She is the granddaughter of the late Eves Joseph Menard and the late Codrey Gaspard Menard of Abbeville, Louisiana and the late Raymond Hebert and Annabel Hebert of Abbeville, Louisiana.
The groom is the son of Pamela Webb Abshire of Carencro, Louisiana and the grandson of the late Alden Joseph Webb and the late Patricia Roberts Gauthier of Lafayette, Louisiana and the late Wilbert and Nelda Abshire of Judice, Louisiana.
On February 6, prior to the ceremony, the grooms mother, Pamela Abshire, hosted a rehearsal dinner at Joey’s in Lafayette, Louisiana.
Escorted by her father, the bride wore an ivory floor-length layered lace wedding dress, fit and flare style, from Essence of Australia which featured a plunging V-neckline, under-laid with cotton style lace and with French lace throughout the bodice and onto the skirt, adorned with Bugle bead work and large lace motifs that extended into a long frothy train. Completing her look, she wore a fingertip length veil with lace applique trim. The bride carried a cascading bouquet of cream Vendela roses surrounded by blue thistle, Dusty Miller and an assortment of succulents, with her grandmother’s rosary contained in a crystal glass holder and wrapped around the stem.
Serving as first Matron of Honor was Emily Monteleon, friend of the bride and 2nd Matron of Honor was Lauren Hebert, sister in law of the bride. Bridesmaids included Amanda Hardy, cousin of the bride, Niki Verzwyvelt, friend of the bride, Jenna Tregre, friend of the bride and Chandler Patin, friend of the bride.
The bridesmaids wore mystic gray floor-length dresses that featured a lace bodice, an illusion neckline with a ribbon defined waist and a fluid mesh skirt. They carried bouquets of cream Vendela roses accented with blue thistle.
Serving as flower girls were Audrey Hebert, Godchild of the bride and daughter of Jacob and Lauren Hebert, Zelie Smith, Godchild of the groom and daughter of Jean Luke and Marie Smith. Together they carried a ring of roses and ribbons.
Jacques Abshire, brother of the groom, served as best man. Groomsmen included Jacob Hebert, brother of the bride, Ben Pavy, cousin of the groom, Garrett Pavy, cousin of the groom, Lance Abshire, cousin of the groom, and Jean Luke Smith, friend of the groom.
Andrew Hebert, nephew of the bride and son of Jacob and Lauren Hebert, served as ring bearer. Ushers for the ceremony included Mike Abshire, Godfather of the groom, Logan Abshire, cousin of the groom, Ted Pavy, Uncle of the groom and James Luquette, cousin of the bride.
After the ceremony, a formal reception was held at Magdalen Place in Abbeville, Louisiana.
The bride’s cake was a 3- tiered almond flavored cake with strawberry and Ameretto filling. The groom’s cake was a triple chocolate fudge sheet cake.
After returning from their honeymoon in Maui, Hawaii, the couple will reside in Carencro, Louisiana.