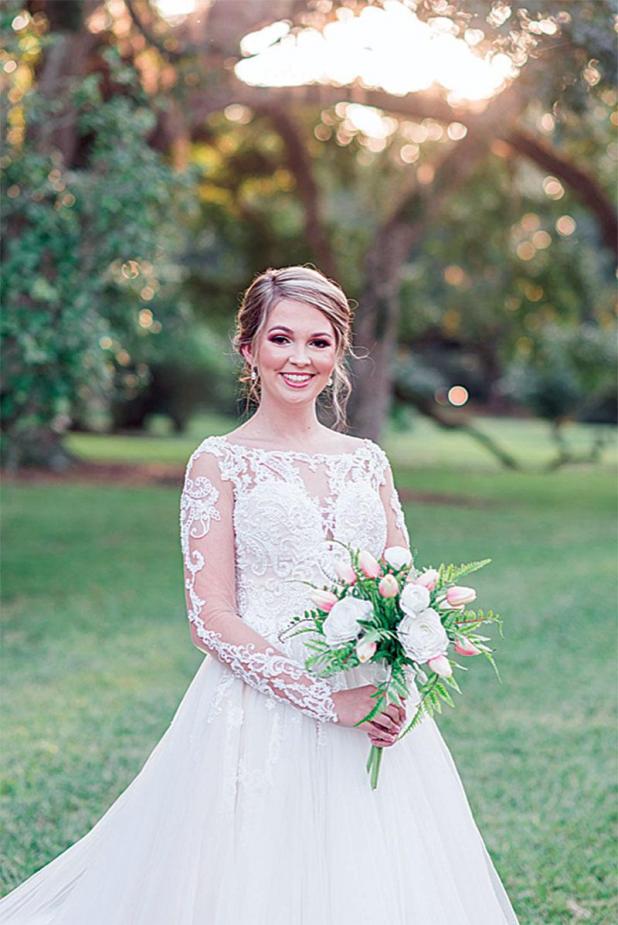 Hannah Elizabeth LeBlanc and Drew Thomas Baudoin of Abbeville, LA were married in a 6:30 p.m. ceremony on Saturday, December 28, 2019 at St. Mary Magdalen Catholic Church in Abbeville, Louisiana. Father Neil Pettit officiated the ceremony.
The bride is the daughter of Marvin Jude and Melissa LeBlanc of Abbev ille, Louisiana and the granddaughter of the late Marvin and Ruby LeBlanc who resides in Abbeville and the late Elmond and Dorethea Husband, who resides in Abbeville. She is a 2013 graduate of Vermilion Catholic High School and a 2018 graduate of University of Louisiana at Lafayette with a Bachelor’s Degree in Behavioral Science with a Minor in Health. She is currently employed with the Vermilion Parish School Board.
The groom is the son of Timothy and Trina Baudoin of Abbeville, Louisiana and the grandson of the late Jean Minas Baudoin and Claudette Baudoin who resides in Abbeville and Thomas Landry and Willie Primeaux who both reside in Abbeville. He is a 2015 graduate of Vermilion Catholic High School and a 2019 graduate of University of Louisiana at Lafayette with a Bachelor’s Degree in Political Science. He is currently employed by Pitt Stop.
Escorted by her father, the bride wore a long sleeved ballgown made by Essense of Australia. Lace accentuated the bodice creating a high neckline with cutouts extending into the long lace sleeves. The lace detailing from the bodice extended slightly into the bride’s skirt before extending into the ballgown silhouette. The back of the bride’s dress featured a beaded strapped back. The dress also featured a breathtaking train, complete with lace detailing and the back of the dress zipped beneath crystal buttons. Finally, the bride wore a cathedral length veil adorned with white sequins.
The bride carried a bouquet of white roses, pink tulips, various greenery and ferns.
The church was decorated with pink and red poinsettias, abundant Christmas trees and holiday draperies.
Caroline Broussard, sister of the bride, served as matron of honor. Bridesmaids included Ashlyn Broussard, best friend of the bride, Ana Husband, cousin of the bride, Hannah Champagne, friend of the bride and Ahni Clark, niece of the groom, who served as junior bridesmaid. They wore full-length off the shoulder dresses in the color Pantone Rose. The dresses featured crisscross detailing at the open back. A trumpet skirt completed the crepe fabric dress. Attendants carried bouquets similar to the bride’s consisting of white roses, pink tulips and various greenery.
Serving as flower girls were Chloe Broussard, godchild of the bride and daughter of Colby and Caroline Broussard, Camille Clark, godchild of the groom and daughter of Andre and Morgan Clark, Leighton Clark, godchild of the groom and daughter of Frankie and Kathryn Clark, and Kaysen Clark, niece of the groom and daughter of Frankie and Kathryn Clark. They wore sleeveless satin, ivory dresses with a full tulle skirt topped with ivory sashes tied into a bow. They carried tiny bouquets of pink tulips.
Jacob Broussard, friend of the groom, served as best man. Groomsmen included Andre Clark, brother in law of the groom, Colby Broussard, brother in law of the groom, Jacob Deville, friend of the groom and Jase Clark, nephew of the groom who served as junior groomsman.
Ushers included Frankie Clark, brother in law of the groom and Ryan LeBlanc, friend of the groom.
Music for the ceremony was provided by Tommy Guidry, Organist, Jeremiah Clarke, Recessional “Prince of Denmark’s March”, Handel: La Rejouissance. Pre ceremony selections were Handel: Allegro Maestoso, Beethoven: Ode to Joy, Purcell: Trumpet Tune in D Major, Marcello: Psalm XIX. Grandmothers and mothers procession were Bach: Bist Du Bei Mire and attendants’ procession was Handel: Lascia ch’io pianga.
Following the ceremony, a reception was held at Blacks in Abbeville, LA where an abundance of Christmas trees decorated with natural light stood. Green wreaths, silver trees, white beaded wreaths, antique glass lanterns filled with candles producing intimate ambient lighting and various greenery decorated the reception. The bride’s cake was a four tier Ivory cake. The cake was almond flavored, adorned with ivory Swiss butter cream icing and with a copper B as the cake topper. The groom opted for a Groom’s table consisting of red velvet, chocolate and lemon cupcakes as well as various French pastries.
For the deceased relatives of the bride and groom, a pink and silver flocked memory tree was made in their honor featuring ornate gold frames containing their pictures.
A rehearsal dinner was held on Thursday, December 26, 2019 at the Riverfront Banquet Hall hosted by Timothy and Trina Baudoin, parents of the groom.
After a wedding trip to Gatlinburg, Tennessee, the couple will reside in Abbeville, Louisiana.