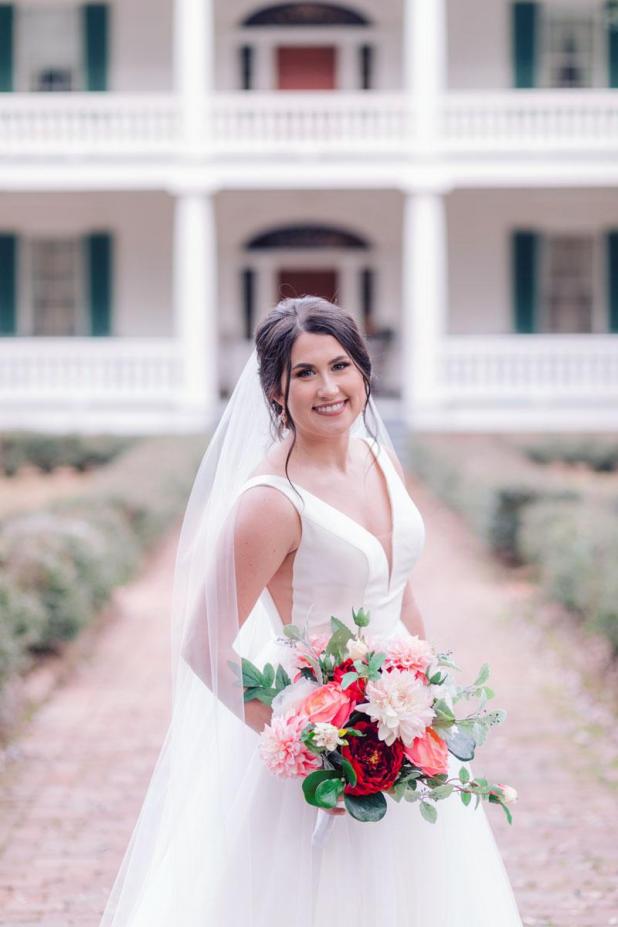 Lanie Renee’ Lege of Kaplan, LA and Slade Elie Boullion of Kaplan, LA were united in marriage during a ceremony that was held on Saturday, March 7, 2020 at Holy Rosary Catholic Church in Kaplan with Father Mark Miley who officiated the 6:30 p.m. ceremony.
The bride is the daughter of Kevin and Shawn Lege of Kaplan, LA. Her grandparents are Brandt and Stella Terro of Kaplan, LA, Joseph and Shirley Duhon of Kaplan, LA, and Kenneth and Linda Gaspard of Kaplan.
Giving the bride away was her father Kevin Lege. The bride wore a minimal, yet chic and utterly amazing simple wedding dress with a deep V-neckline from designer Stella York. Grand Mikado and tulle took the shape of a voluminous silhouette, The plunging V-neckline matched a V-back. Mirroring the neckline and back are deep V-shaped side cutouts constructed with nude tulle. A long tulle train and satin cinched belt at the waist added to this ball gown. The both modern and vintage dress zipped up beneath fabric covered buttons down the back. The bride chose a Cathedral length veil of tulle only.
The bride carried a hand-held bouquet of rose Peonies with English Garden roses and pink Dahlia with Froster Veronica greenery adorned with a handmaid heirloom catholic rosary, which was a gift to the bride from her groom has stunning crystal lined pearls with petal bead caps for each Our Father bead. The Hail Mary beads are genuine Swarovski “Tiffany Blue” crystals. It also held an elegant silver cross necklace from the bride’s great-grandmother, and an original white stringed tiny rose flower from the bride’s mother’s bouquet.
The groom is the son of Todd and Leslie Boullion of Kaplan, LA. His grandparents are Brenda Boullion of Kaplan. Wilfred (Blue) and Joan Boullion of Kaplan, LA. Kersey Hargrave of Kaplan, LA. Margaret Hargrave of Kaplan, LA.
Jana Jones, friend and cousin of the bride served as maid of honor. Bridesmaids included Olivia Terro, cousin of the bride, Emily Terro, cousin of the bride, Mia Boullion, sister of the groom, Whitney Boullion, sister of the groom, Ashley Clostio, friend of the bride, Jamie Guilbeaux, friend of the bride, Morgan Leblanc, friend of the bride. Aurie Hargrave served as flower girl, she is the daughter of Brandon and Ashley Hargrave and the Godchild of the groom, she held a small basket of white roses.
The bridesmaids wore taupe colored chiffon floor length dresses featuring thick, criss-crossed straps in the front while carrying hand-held bouquets of Playa Blanco and white O’Hara roses with white Lisianthus with cuscus and seed Eucalyptus and Silver Dollar Eucalyptus white wax.
Drew Gaspard, cousin of the groom attended as best man. Groomsmen included Ty Lege, brother of the bride, Zane Hargrave, cousin of the groom, Dylan Roussel, friend of the groom, Teal Richard, friend of the groom, Laine Broussard, friend of the groom, Matthew Broussard, friend of the groom and cousin of the bride, Jobe Cormier, friend of the groom.
The ring bearer was Elie Hebert, son of Kristi Boullion and Dax Hebert. Rhett Gaspard, cousin of the groom and Jake Hebert, cousin of the groom served as ushers.
A reception was held at L’eglise in Abbeville and was decorated in a rose gold theme with hand painted acrylic signs. A special thank you to country music singer, Jaryd Lane for surprising the bride and groom by performing their wedding song “Heaven”.
The bride’s cake was a beautiful 3-tiers of red velvet cake with cream cheese filling covered with homemade textured buttercream topped with a rose gold “B” initial topper sitting upon a rose gold stand provided a sweet delight for guests to enjoy.
The groom’s cake was a white cake with pecan praline filling covered with a homemade chocolate icing with chocolate ganache drop accents, adorned with a set of deer antlers and deer spikes.
A rehearsal dinner was held at RiverFront Banquet Room in Abbeville, LA on February 28, 2020 and was hosted by the grooms parents Todd and Leslie Boullion.
Upon their return from a wedding trip to Belize, Mexico, the new couple will reside in Kaplan, LA.
The bride is a 2014 graduate of Kaplan High School in Kaplan, LA. In 2018 she graduated from the University of Louisiana at Lafayette with a Bachelor of Science degree in Dietetics. In 2019 she received her Master of Science in Nutritional Science from Franciscan Missionaries of Our Lady University in Baton Rouge. LA.
The groom is a 2014 graduate of Kaplan High School in Kaplan, LA. In 2017 he received his Associates Degree in Industrial Technology from South Louisiana Community College. He is currently employed with Chevron.