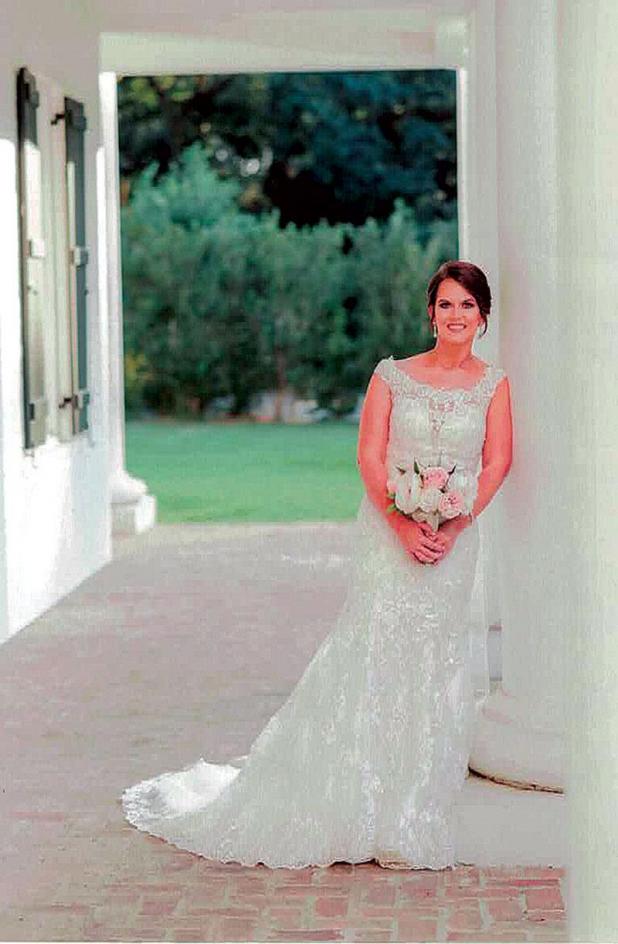 Ahnie Michelle Simon and Jacob Dustin Wiggins were united in the sacrament of Holy Matrimony on Saturday, November 9, 2019, at St. Mary Magdalen Catholic Church in Abbeville, LA. Father Louis Richard officiated the 6 p.m. ceremony.
The bride is the daughter of Donna Stelly of Abbeville, LA and Barry Simon of Kaplan, LA. She is the granddaughter of Lois Cessac and the late Curnal Cessac of Abbeville, LA and Vernice Long and the late Robert Long of Abbeville, LA.
The groom is the son of Karen Gertling of Scott, LA and Jackie Wiggins of West Monroe, LA.
Escorted by her father, Barry, the bride wore a cap sleeve ivory gown featuring crystal beaded Alencon lace with an illusion neck line and a fit and flair silhouette. She wore a fingertip veil accented with pearls and rhinestones.
She carried a bouquet of white hydrangeas with blush and white roses and baby’s breath.
Serving as Matron of Honor was Sadi Dworacyzk, friend of the bride. Bridesmaids included Stephanie Tate, friend of the bride, Taylor Shepard, friend of the bride, Mireille Weber, friend of the bride and Danielle Simon, sister-in-law of the bride. Madison Lenox, godchild of the groom attended as junior bridesmaid. Piper Simon, niece of the bride, attended as flower girl.
They all wore Alfred Sung platinum full-length sateen twill dresses with a v-neckline and open back. They carried a bouquet of white hydrangeas with blush and white roses and baby’s breath..
Isaac Wiggins, brother of the groom attended as Best Man. Groomsmen included Jason Lenox, Coty Richard, Ross Rials and Scott Harson, all friends of the groom. Deuce Wiggins, nephew and Parker Simon, godchild of the groom served as junior groomsmen. Dax Wiggins, godchild of the groom, served as ring bearer. Ushers for the ceremony included Asa Whitewing and Stephen Harris, friends of the groom.
Music for the ceremony was provided by Tommy Guidry. Readings were given by Gary Landry, godfather of the groom and Lynette Brinkerhoff, godmother of the groom.
Escorted by Luke and Hayes Simon, nephews of the bride, the mother of the bride wore a slate blue floor lenth A-line scoop-neck dress with a chiffon lace sequined top. The mother of the groom, escorted by the groom, Jacob Wiggins, wore a grey off-the-shoulder floor-length sweetheart neck shimmer lace gown.
Following the ceremony, a formal reception was held at The Madison in Broussard, LA.
The couple will reside in Youngsville, LA, after a wedding trip to Negril, Jamaica.