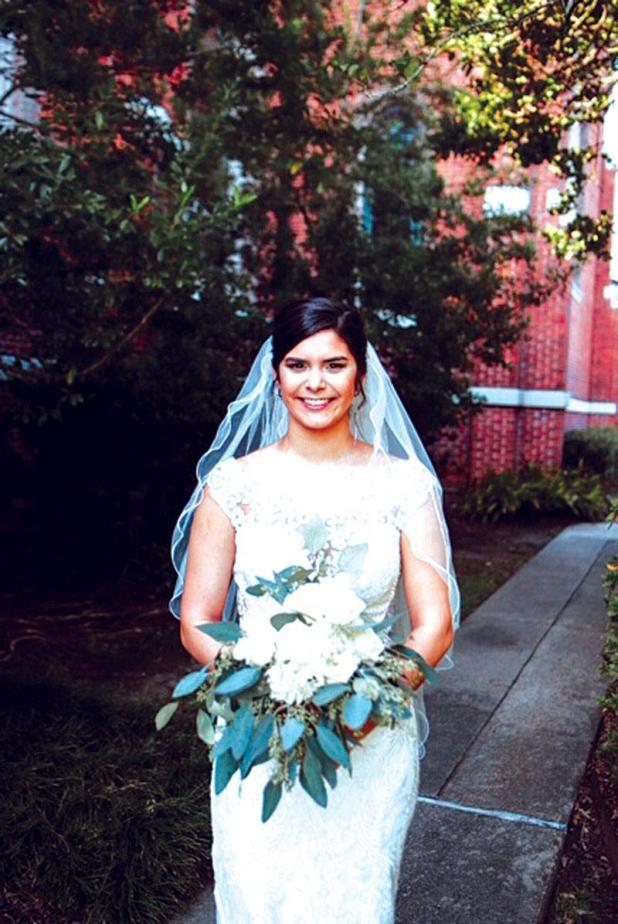 Miss Britney Noela Broussard and Mr. Tanner Jamison Dubuc were united in the Sacrament of Holy Matrimony on Saturday, November 16, 2019 at half past six o’clock in the evening at Saint Mary Magdalen Roman Catholic Church in Abbeville, Louisiana. The Reverend Father Paul Broussard, uncle of the bride, officiated the double ring ceremony.
The bride is the daughter of Mr. and Mrs. Timothy Broussard of Abbeville. Her mother is the former Gwen Huval. Britney is the granddaughter of Mrs. Elda Trahan Huval of Abbeville and the late Daniel Wade Huval, and Mr. and Mrs. John Huey Broussard of Abbeville.
The groom is the son of Mr. and Mrs. Randall L. Dubuc of Scott, La. His mother is the former Jeanne Landry. Tanner is the grandson of the late Mr. and Mrs. Thomas James (Jimmy) Landry and Mr. Leeland Xavier Dubuc and Mrs. Mary Delores Dubuc.
The bride, given in marriage by her father, selected a beautiful gown designed by Essence of Australia. The mermaid silhouette gown was made of graphic ivory lace over matte-side lustre satin. Off-the shoulder sheer lace sleeves framed a deep sweetheart neckline with a cathedral length train finished with organic edged lace. A stunning cameo lace back shows off the swirling scroll lace. To complete her ensemble, Britney wore an elegant two-tier pencil edge fingertip veil.
Meaningful details included by the bride in her bridal bouquet included a picture of her grandfather Daniel Wade Huval in a locket. As her something old, she used her great-grandmother Noela Trahan’s rosary along with a crucifix from her cousin Brock Wade Huval. She borrowed one of her mother’s flowers from her wedding bouquet to complement her bouquet of Vendela roses, white hydrangea, seeded eucalyptus, and silver dollar eucalyptus.
Leah B. McLain, sister of the bride, served as matron of honor, Annemarie Broussard, sister of the bride and Ali Dubuc, sister of the groom, served as bridesmaids. They wore hunter green sleek scuba-crepe sheath gowns with cap-sleeves and a deep v-back with a bow by Speechless.
Patrick Mouton, friend of the groom, served as best man. Groomsmen included, Logan Primeaux, friend of the groom and Brad Dubuc, brother of the groom. Ushers included Graham Lege, friend of the groom, Caleb and Ben Dubuc, cousins of the groom, and Marcus Broussard, brother of the bride. Tanner, the groomsmen and the ushers wore Michael Kors steel grey suits.
The mother of the bride wore a charming ice pink lace v-neck, floor length sheath dress embellished with beaded alencon lace with a champagne underlay. She completed her gown with a crystal rhinestone sash belt.
The mother of the groom wore a burgundy colored mermaid dress with a diamond patterned lace overlay embellished with flowers cascading throughout. This off the shoulder styling leads to a modern day look.
Readings for the ceremony were given by Katie Landy, cousin of the groom and Katie Guidry friend of the bride and groom. Anne Broussard, aunt of the bride and Caleb Dubuc, cousin of the groom brought up a Bible and Crucifix.
Music for the ceremony was provided by Mr. Tommy Guidry, organist and Mr. Jared Gray, trumpeter.
Following the wedding nuptials, a reception was held at Erath Community Center which was beautifully decorated with elevated ferns and arrangements of florals in an array of white vendela roses, peach roses, sunflowers, white and sea blue hydrangeas, and seeded eucalyptus.
The bride selected for her wedding day a three tiered French vanilla wedding cake and featured pecan praline, bavarian cream and cream cheese fillings and was accented with fresh flowers. The groom selected a 3 tiered chocolate chip cookie cake with vanilla icing.
A rehearsal dinner was held on Thursday November 14, 2019 hosted by the groom’s parents, Randy and Jeanne Dubuc at Farm Bureau in Abbeville, La. Following their return from a wedding trip to Walt Disney World, the couple will reside in Meaux, Louisiana.