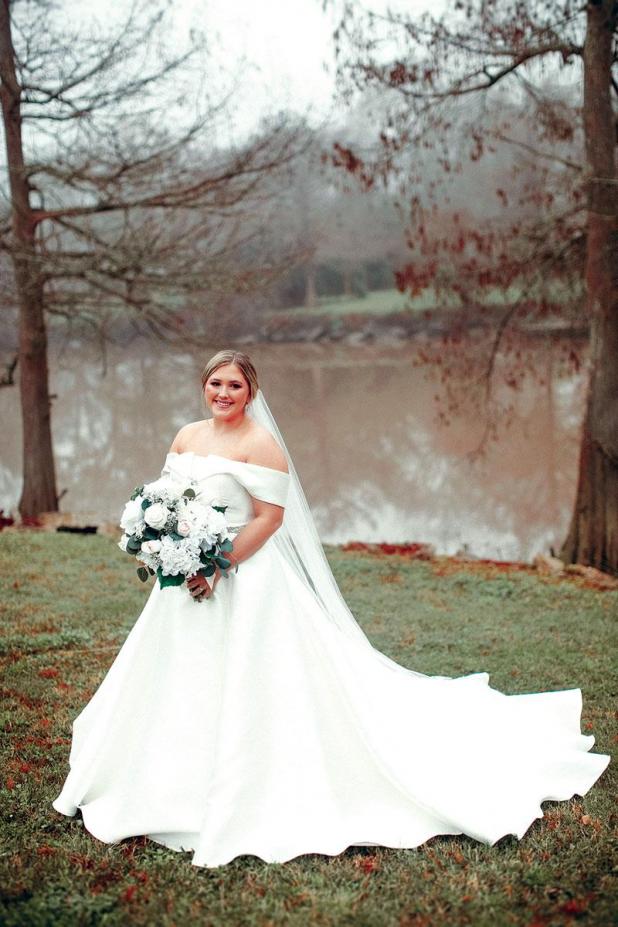 Caroline Paige David, of Abbeville, LA and Drake Aaron Broussard, of Abbeville, LA, were united in a nuptial ceremony on Saturday, February 15, 2020, at St. Mary Magdalen Catholic Church in Abbeville, LA. Reverend Louis Richard officiated the 6:30 p.m. ceremony.
The bride is the daughter of Mr. and Mrs. Aaron Lance David of Abbeville, LA and the granddaughter of Larry LaPorte And Dolores Landry and Herschel David and the late Cynthia David
The bride is a 2015 graduate of Vermilion Catholic High School in Abbeville, LA, and a 2019 graduate of University of Louisiana at Lafayette with a Bachelor of Science in Nursing Degree. She is currently employed by Our Lady of Lourdes Women’s and Children’s Hospital.
The groom is the son of Mr. and Mrs. Jamie Broussard of Abbeville, LA and the grandson of Mr. and Mrs. Dudley Broussard and Mr. and Mrs. Greg Parlier.
He is a 2014 graduate of Vermilion Catholic High School in Abbeville, LA, and a 2018 graduate of University of Louisiana at Lafayette with an Bachelor’s Degree in Accounting. He is currently employed with the Vermilion Parish School Board office.
Escorted by her father, the bride wore an ivory, off the shoulder Montreal ball gown by Wendy Sullivan. It had a structured bodice and a small V-cut in the neckline and included a detachable, optional V panel. The back of the gown was adorned with covered satin buttons to the bottom of the train. She completed her look with a cathedral length veil with a moderate width and floral lace motif along the bottom edge.
The bride carried a free flowing, hand tied bouquet with an ivory satin ribbon made up of a mixture of white hydrangea, Vendela roses, O’Hara roses, a touch of Quicksand roses, Queen Anne’s Lace and Silver Dollar Eucalyptus. In loving memory, tucked in her bouquet was the wedding band of her late grandmother, Queenie, as well as the rosary of her late godfather, Todd LaPorte.
Serving as Maid of Honor was Analeah Tribaldos. Attending as Matron of Honor was Lauren Hebert. Bridesmaids included Kayla Broussard, Olivia Chiasson, Anna Dartez, Halie David, Sarah David, Lexi Langlinais, Leah LeBouef and Cecily Steiner. They wore one shoulder, draped bodice column gowns in the color mist and carried a mixture of blue hydrangea, Vendela roses and silver eucalyptus, arranged to compliment the bride’s bouquet.
Attending as flower girls were Audrey Hebert, daughter of Mr. and Mrs. Jake Hebert, Alyssa Noel, daughter of Skylar Noel and Ainsley Adams, daughter of Mr. and Mrs. Steven Adams. They carried smaller versions of the bride’s bouquet.
Brennan Gallet attended as Best Man. Groomsmen included Alec Broussard, Grant Broussard, Emile Chiasson, Aaron David, Grant David, Jacob David, Shay LaPorte, Clay LeBlanc and Westley Meaux. Ring Bearer for the ceremony was Andrew Hebert, son of Mr. and Mrs. Jake Hebert.
Ushers included Cole Delcambre, Mitchell Guidry, Mat Lege and Connor Menard.
The isle of the church was adorned with fresh arrangements of Vendela roses, white hydrangea, white stock, ruckus and silver dollar eucalyptus. Music for the ceremony was provided by Organist, Tommy Guidry with Vocalist Laura Humble who performed Purcell’s Trumpet Tune in D Major, Processional and Charpentier’s Te Deum, Recessional. Eagle’s Wings and The Gift of Love by Hopson, were the musical selections for the evening.
A rehearsal dinner, hosted by the groom’s parents, took place at Southern Oaks Country Club in Abbeville, Louisiana.
A formal reception took place at Magdalen Place in Abbeville. The bride’s cake was a four tiered white almond cake with buttercream icing. Ameretto cream and Bavarian cream alternately filled the tiers. Clusters of fresh flowers adorned the top of each tier. The cake was elegantly displayed on silver plateau.
The groom’s cake was two tiers of chocolate icing with chocolate cake and buttercream filling on the bottom tier and white cake with chocolate buttercream filling on the top layer. The golf ball theme cake was decorated with chocolate covered strawberries on and around it.
After a wedding trip to Sedona, Arizona, the couple will reside in Abbeville, Louisiana.