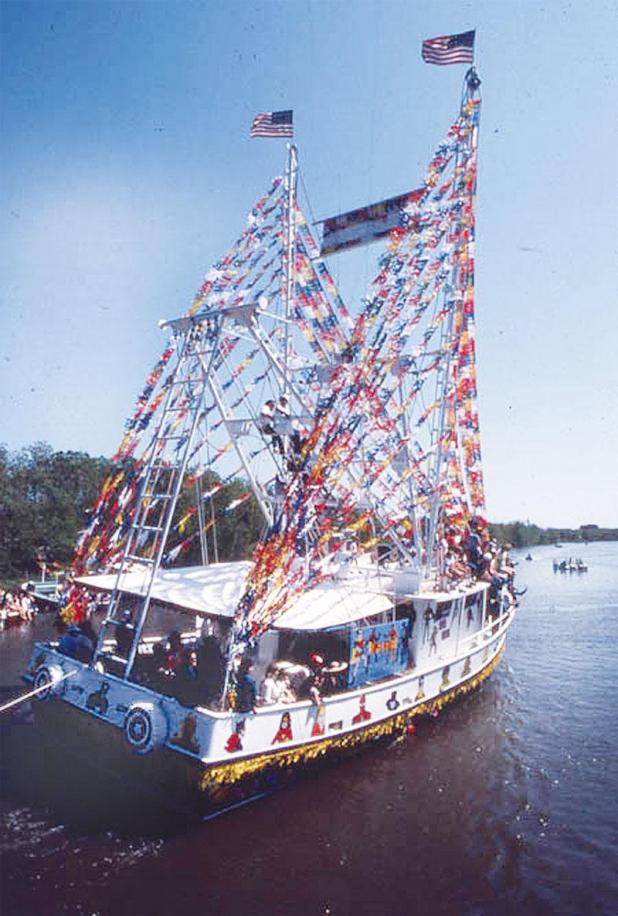 DELCAMBRE — Since 1950, the Delcambre Shrimp Festival has hooked visitors with good food, cold drinks and fais-do-do music.
Scheduled from Aug. 16 to Aug. 20, the festival marks the beginning of shrimping season.
An estimated 20,000 people attend the festival, said Tracey Trim, president of the Delcambre Shrimp Festival Association. The festival is handicap accessible.
“It’s very good for Delcambre because it brings a lot of tourists into the town. It gets people to see what Delcambre is really about. It’s great for the economy,” he said.
Festival events include the shrimp cook-off and pageants. The festival elects a king as well as queens from a pool of girls and young women.
Entertainment includes carnival rides and live music.
This year’s music lineup features Clay Walker, Daryle Singletary and local artists such as Jeff Dugan, Kip Sonnier, Sal Melancon, The Beau Young Band, Leroy Thomas, Dustin Sonnier, T. K. Hulin and others.
Family-run booths will serve boiled shrimp, friend shrimp, shrimp salad and other shrimp dishes. Vendors also sell festival food like hamburgers, hot dogs and nachos.
Some 70 to 100 vendors should be at the festival, Trim said.
“All of the food is prepared and cooked by volunteers. They volunteer their time to come out and cook each dish. We start prepping for this festival on Aug. 1. We batter the shrimp ourselves; we freeze them; we package them,” he said.
“Every dish should be a crowd favorite due to the fact that we’re oneof the last few local festivals around this area. We don’t let outside vendors come in.”
Mayor Pam Blakely also described the festival as a community initiative.
“What the shrimp festival really means is, the Delcambre community gets together,” she said.
“We cook all our own food. We do everything ourselves. Nothing isbrought in. The community donates their time and works really hard.
Then, when the festival’s finished, we put the profit back into the community.”
Sixty-seven years ago, the festival began as a fundraiser for the fire department. The festival still raises funds for local charities and organizations, such as the Boy Scouts and Girl Scouts.
Profits also support Delcambre High School, Delcambre Elementary, Our Lady of the Lake Catholic Church and St. Martin de Porres Catholic Church. Last year, the profits funded a new church tabernacle.
Shrimping and faith have anchored the Delcambre community for generations. The blessing of the shrimp fleet became part of the festival in 1953.
From the 10 a.m. mass, held in the Delcambre Shrimp Festival Building, people walk to the dock. The parish pastor and festival royalty will set out on a boat to bless shrimping boats in the harbor.
The Rev. John “Buddy” Breaux, pastor of Our Lady of the Lake and St. Martin de Porres, will lead the blessing of the fleet for the first time this year.
“Shrimp is what a lot of families lived on. Their fathers were shrimpers,” Blakely said. “To bless the fleet means that we should have a good year, that shrimp should be plentiful.”
“A blessing’s good for everything, you know,” she said, laughing.
For more information, visit www.shrimpfestival.net.