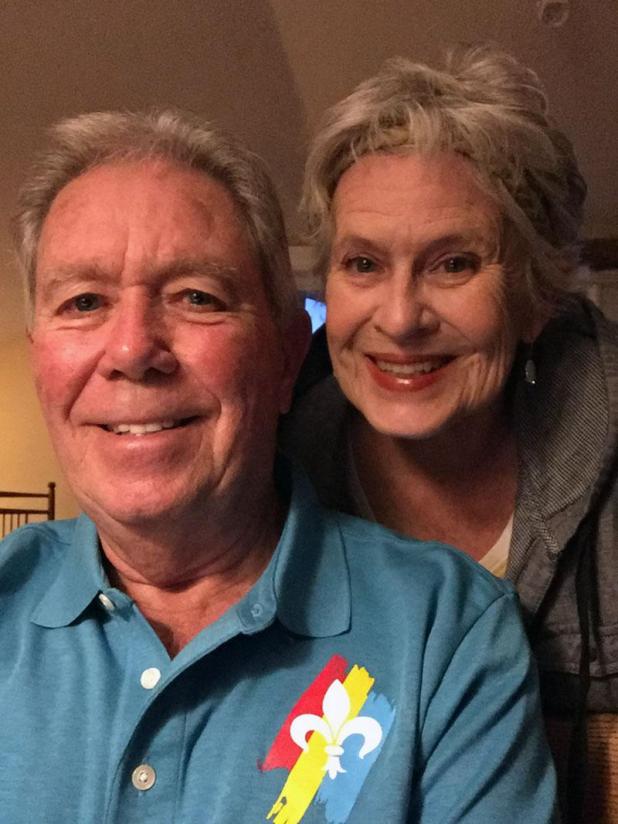 Ray and Brenda Trahan with Louisiane-Acadie, a non-profit
association that works to bring all Cajuns and Acadians together.

The Worldwide Congress of Acadians, CMA 2019, opens in Canada in three weeks and Cajuns are well represented in the programming.
Le Congrès Mondial Acadien 2019 will feature grand opening and closing concerts in Prince Edward Island and New Brunswick. Special concerts and presentations will be held throughout the 14-day event, especially on August 15, la Fête Nationale des Acadiens. There will be conferences at l’Université de Moncton, more conferences in Dieppe at the Economic Forum and the Women’s Summit in PEI. The Aberdeen Cultural Center in Moncton will feature Louisiana art and music. From August 16 through August 23, the Louisiana Pavilion will showcase Cajun and Louisiana culture including music, food, history, genealogy and film. Family reunions also have rich programming for all participants. Sister cities will renew their accords. Here are a few of the Cajuns who will represent Louisiana and Acadiana.
Ray and Brenda Trahan, will continue to organize and supervise all activities sponsored by Louisiane-Acadie and the Louisiana State Office of Tourism. At le Pavillon Louisiane in downtown Moncton, from 3:00 to 5:00 every day, two Louisiana speakers will make presentations for visitors. De 5:00 à 7:00 every day in the Louisiana Pavilion, great Cajun food will be served while musicians get the crowd dancing.
Bruneaux and Blake Miller, black pot chefs, will be responsible for the rich aroma of fresh-cooked Cajun fare in downtown Moncton. Their Cajun food will be served de 5 à 7:00. Blake will also play Cajun music at the Louisiana Pavilion.
Melissa Bonin opens an exhibit of her recent works of art, l’Ombre Dorée, at the Aberdeen Cultural Center in Moncton on August 20. Une Soirée Louisianaise promises an exceptional evening of poetry, song and musical improvisation. Melissa will read her poetry along with poets Zachary Richard and Jean Arceneaux.
Zachary Richard will participate in every CMA 2019 concert and will be at le Pavillon Louisiane on August 18.
Sam Broussard, guitarist, will accompany Zachary Richard and Dr. Barry Ancelet at various venues.
Choupique and Chère Mom are two Cajun bands, along with fiddler, Terry Huval, who will provide dance music at le Pavillon Louisiane.
Gayle Breaux Smith will take part in a flag raising ceremony to honor the Breaux family at Riverside-Albert, New Brunswick, on August 16. There will be an unveiling of a monument dedicated to the Acadians of the Chipoudie community who were deported from there. On August 17, she will speak about the genealogy of the Breau families at the Louisiana Pavilion.
Abbeville Councilman Brady Broussard, Jr. will meet with the mayor of Tracadie-Sheila, Dennis Losier. They will renew their Sister Cities agreement and discuss their proposed meeting in Louisiana during the 2020 Grand Réveil.
Viola Fontenot, author of the LEH book of the year, A Cajun Girl’s Sharecropping Years, will greet visitors and sign her books at the Louisiana Pavilion. In her book, Fontenot describes her life as the daughter of a sharecropper in Church Point, including details of field work, domestic arts and Cajun culture. The account begins with stories when her family lived off a gravel road near the woods without electricity, running water, or bathrooms, and a mule-drawn wagon was the only means of transportation. Fontenot explains rural holiday traditions, courting customs, children’s games and the Saturday night fais do-do.
Mayor Ray Bourque of Broussard will be meeting with his counterpart in Broussard’s Sister City, Cap-Pelé, to confirm their commitments to continued exchanges.
Dr. Moriah Istre Hargrave and Dr. Elista Istre announce the Canadian premier of their film, First Cousins: Cajun and Creole Music in South Louisiana at the Louisiana Pavilion. This film explores the rich musical heritage of Cajuns and Creoles, French speakers who have shared tunes, swapped instruments and danced in each other’s arms for generations. Vermilion Parish’s own D.L. Menard is one of many musicians featured in this documentary.
Warren and Mary Perrin have a full schedule of participation at CMA 2019. On August 17, Warren will speak at the Daigle Family Reunion in Richibucto about the birth of Cajun culture. On the same day at 3:00 at the Moncton Library, Mary and Warren will launch their latest book, Seeking an Acadian Nation: The 1930 Diary of an Evangeline Girl. Corinne Broussard kept a detailed journal of the 17-day, 3,000 mile train trip, of the first official Louisiana Acadian pilgrimage to Grand Pré, Nova Scotia, by Sen. Dudley J. LeBlanc. Both Mary and Warren will speak at the Louisiana Pavilion on August 18. On August 20 from 1:00 to 5:00, they will participate at the Judge Allen Babineaux International Civil Law Symposium. The Francophone Section of the Louisiana State Bar Association program addresses the Acadian diaspora. Warren will speak about the New Acadia Project that hopes to find the first settlement of the Acadians along the Bayou Têche. Mary will speak about the healing traditions of the Acadians. Warren Perrin remembers fondly the beginning of the collaboration with the University of Moncton law school. “Forty years ago, Judge Babineaux invited me to accompany him to visit the Law School in Moncton. We have been collaborating ever since,” said Perrin.
Andy Perrin, representing the Acadian Museum of Erath, will record many events and send them to Louisiana for airing on local television stations.
Alison Miller, director of the Vermilion Parish Tourist Commission and Abbeville Cultural Center, will join other Louisiana tourism boards who will promote their areas at the Louisiana Pavilion. Miller says, “Promoting Vermilion Parish is serious business and I’m proud to be from the most Cajun place on Earth.”
Dr. Barry Ancelet will be featured at the Louisiana Pavilion on August 19. He will also present a paper, “Dikes and dialects, songs and stories, legends, possessions and processions: shared identities between Acadie du Nord and Acadie Tropicale,” at the Judge Babineaux International Civil Law Symposium on August 20 at 3:00.
Earlene Broussard will attend le Sommet des Femmes on August 11 and 12 at the Mills River Resort, Prince Edward Island.
Youngsville Councilman Gary Williams will meet with officials from Cocagne, New Brunswick, to consider a friendship agreement.
Judge Byron and Meg Hebert of Abbeville will attend the Hebert family reunion on August 14 in Cocagne.