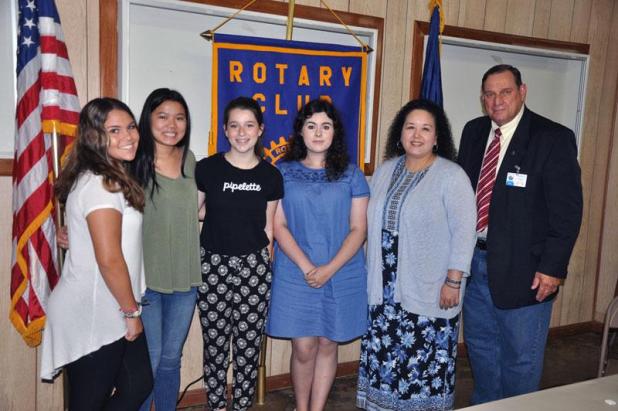 Vermilion Catholic French teacher Julie Lapeyrouse (second from right) recently took students on a trip to Abbeville, France. Some of those students (L-R) Katherine Townley, Angel Nguyen, Ellis Vienne and Camille Harrington, spoke to members of the Rotary Club of Abbeville. Rotary President Thomas Thompson joined the group for a photo after the meeting.

After visiting Abbeville, France through an exchange program, Vermilion Catholic High School students will host students from France at their homes this Thanksgiving.
On Wednesday, Vermilion Catholic French teacher Julie Lapeyrouse spoke to the Rotary Club about the school's trip to France and plans for French students to visit Louisiana for 10 days.
Last year, Lapeyrouse received a message from Lycées Saint Pierre high school in Abbeville, located in the Picardie region of France, north of Paris.
“It said, 'We're a high school in Abbeville, France; you're a high school in Abbeville, Louisiana. Let's do something together,” she said, standing behind a wooden podium. Sitting at a white folding table next to the podium, four students turned their heads toward their teacher, smiling.
Lapeyrouse and her students arrived in France on Memorial Day. From the airport, a bus transported them to the World War I American Cemetery in Belleau, France. The students attended a memorial service with members of the U.S. Marines, Army, Navy and Air Force.
“We, the two schools from Abbeville, had a wreath laid at the memorial. That was, for my students, their first view of France.”
For a lesson in local history, students traced the steps of the Rev. Antoine Desire Megret, a Roman Catholic priest and the founder of Abbeville, Louisiana.
“One of the first places we got to see was the monastery where Pere Megret did his studies,” Lapeyrouse said.
“We got to visit the Abbey of Saint Riquier, which is right outside of Abbeville. That's the reason Abbeville in France is called Abbeville; it was a city that had an abbey. Pere Megret decided to name our Abbeville after the Abbeville that he knew.”
Students were quick to compare France and Louisiana.
“The concept of us both being from Abbeville was not lost on them,” Lapeyrouse said.
Ellis Vienne stepped to the podium.
“Once I got over the shock of not having air conditioning or ice in my drink in France, I really enjoyed the trip a lot,” she said with a smile.
“It was nice to see all the different landscapes because it's very hilly over there, and here, it's extremely flat. I stayed in a farmhouse, which was very nice. I helped with the chores, and I got to see the dairy farm. I actually stayed with two families, and the second time, I got to stay in a castle,” Vienne said, still grinning.
Camille Harrington stood up to speak.
“Bonjour,” she said with enthusiasm. “It was truly amazing that, even though we were an ocean apart, the students here and the students in that class in France were so similar.
“It was so interesting to see that they have castles and 16th century buildings right in their backyard. It made me see how rich of a culture they have.
“The French people knew that we have a French influence in Louisiana. They did not realize, though, that the French influence is still so strong. They were shocked to hear that we have French names,” Harrington said.
Fifteen students from Lycées Saint Pierre high school will stay with 15 Vermillion Catholic students and their families during the Thanksgiving break.
The program will teach French students about the Acadian exile.
Students will tour Abbeville, the Acadian Museum in Erath, Vermilionville in Lafayette, the Evangeline Oak in St. Martinville, Jefferson Island and Avery Island. They will also travel to New Orleans to visit The National WWII Museum, the Old Ursuline Convent and the French Quarter.
“The students asked to see a plantation,” Lapeyrouse said. “That's the closest thing we have to a castle.”
“I would really like for them to experience a bit of their home halfway across the world because we were able to have that experience there, to see those similarities,” Harrington said. “It was a very enlightening experience for us, and we hope to be able to give them a similar one.”
Lapeyrouse asked for donations to help with the cost of the program.
“We want to be as good of hosts to them as they were for us,” she said.
To donate, mail checks to Vermilion Catholic High School Attn: Abbeville exchange.