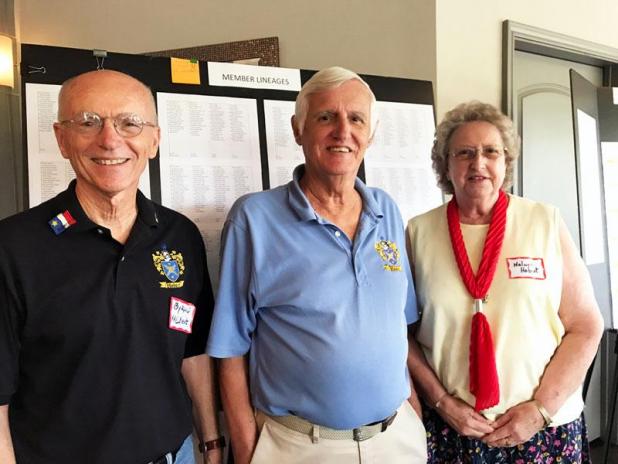 Heberts have reunion in Abbeville

The Hebert Family met on the banks of the Vermilion River in Abbeville this past Saturday.
L’Association des Hébert du Monde, based in Abbeville, was called to order by President John Hebert from Prairieville at 10 a.m.. Since 9 a.m., more than 30 members had been gathering, setting up tri-fold poster displays of family trees and laminated maps, carrying in heavy volumes of genealogy research, hanging banners and flags. The meeting opened with a prayer led by Byron Hebert of Abbeville.
“I got involved with genealogy and the Hebert Family because of CMA-Louisiane 1999,” said Byron. “Russell Gaspard, whose mother was an Hebert, had done all of the footwork in securing Abbeville as the site for the 1999 international reunion. He wanted someone with the Hebert surname to head the organization. In 1997, I became the co-chair of the new association, along with Charles Hebert of Houston. Russell Gaspard eventually persuaded me to serve as president of our association for the Louisiana Congrès in 1999. We have kept it going ever since, over 20 years.” explained Byron.
“In 1997, I had done no genealogy research, so I had to get up to speed,” Byron added with a chuckle. He opened a copy of The Heberts, Cajuns and Louisiana by Dr. Joseph Pervis Hebert, Jr.
“This book is available at the Vermilion Parish Library in the Genealogy Room. Anyone who wants to find out more about their Hebert ancestors, this is a good way to begin. This book documents that most Heberts in Louisiana descend from either Étienne or Antoine Hebert,” explained Byron.
President John Hebert reported that there are 564 members on the Hebert Family Association mailing list as well as over 100 more members in the Breaux Bridge chapter.
“One Hebert in Canada has a database of thousands of Heberts located worldwide,” said John, “and we are trying to make it accessible to all members. There are Heberts who were deported to Liverpool, England, then back to France and whose descendants still live in France. The database can help connect Louisiana with Canada and France, connect Heberts from around the globe.”
During the meeting, the president asked members to relate information about their families.
Nelwyn Hebert of New Iberia reported that her ancestors are Jean-Baptiste and Jean-Louis from Nova Scotia, who arrived in St. James Parish, Louisiana, via Halifax, and then Exhubert and Désiré Hébert from Patouville. She also explained double

connections in her family.
“My grandfather, Léodias Hébert of Patoutville, married Clothilde Hébert from Lafourche Parish. Then, my grandmother Clothilde’s brother, Claude Hébert, married Léodias’s sister, Thérèse,” said Nelwyn.
Members nodded and laughed in agreement that their family trees include the same kind of connections.
Edwin Hebert of Abbeville talked about another Désiré Hebert, son of Alexander, from Lake Arthur. “He had the first bank in Lake Arthur. He had lots of land and cattle and his bank loaned money to ranchers driving cattle to market. His house still stands in Lake Arthur.”
President John Hebert emphasized the willingness of family researchers to visit the land of their ancestors, to walk in their footsteps, to discover any existing houses and historical markers and to consult experts.
“On our bus trip during CMA 2019, we will travel to the Annapolis Royal, Nova Scotia, area to visit the Hebert settlement on present-day Bloody Creek,” said John. “In 1652, brothers Étienne and Antoine Hébert arrived from Martaizé, France, with an important group of settlers brought to the New World by the Duke of Aulney. We want to walk where our ancestors walked ten to twelve generations ago. We now have GPS coordinates for some of the Hebert ancestral lands. How wonderful is that!”
John continued, “I am the eleventh generation from Étienne Hébert who came to Nova Scotia, and I have personally walked on the lands of every one of my Hebert ancestors of my direct line.” There is emotion in John’s voice.
Family and connecting across the centuries and national borders matter to the Heberts.
At CMA 2019, the Hebert family will gather in Cocagne, New Brunswick, on August 13 and 14. About twenty members from Louisiana will be traveling there. There’s a full program of meet and greet, genealogy, conferences, entertainment and food. About 4:00 on August 14, everyone in attendance will take a group photo to commemorate the occasion. The CMA 2019 Hebert Reunion will be another milestone for l’Association des Hébert du Monde.
It’s obvious though that, after the CMA 2019, the Hebert family will continue to piece together their history, and through their association, inspire their own children and grandchildren to take up their mission.
It’s obvious that family and place matter to them.
For more info about the Hebert Family Association, call John Hebert at (225) 622-4412.
Family and place also matter to the Broussard Family. During CMA 2019, the Broussards will meet at Solomon Gardens located on Salisbury Road along the banks of the Petit Codiac River, a few miles from downtown Moncton in the afternoon of August 14. Ancestors Beausoleil and Alexandre Broussard both settled along the Petit Codiac River. Historian Ronnie Gilles LeBlanc will speak about the Acadians who lived near Moncton before the Deportation. The group will visit a park dedicated to Victoire Broussard and place a wreath on farmland once owned by the Broussards. A group photo will be taken at 4:00. For more details, call Cheryl Broussard Perret at (337) 962-9200 or visit the CMA 2019 website: www.cma2019.ca
The Breaux Family has a full slate of events at CMA 2019 on Wednesday, August 14, in Cocagne, N.B., and they join the Heberts that night for a social. On August 16, there is a dedication of a monument honoring the Acadian families, including the Breaux, from the Chipodie settlement. Contact Gayle Breaux Smith, president, for more info: gaylebreauxsmith@gmail.com
The Lege and Leger Families will have a reunion in Abbeville on Saturday, August 3, at the Woodman of the World Hall from 10:00 a.m. to 4:00 p.m. There will be music, food, fun and activities for kids of all ages. Call Sue Lege Neveu for more information at (337) 893-6877.