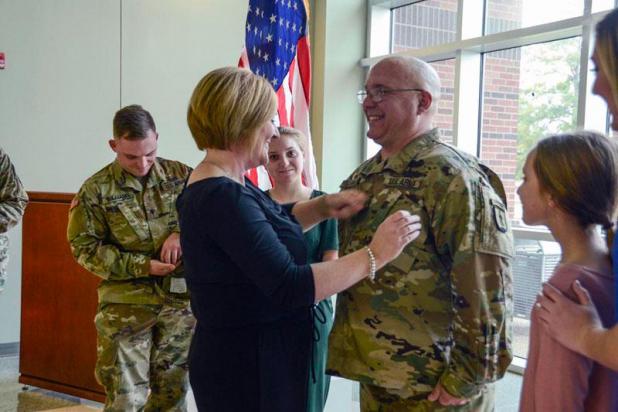 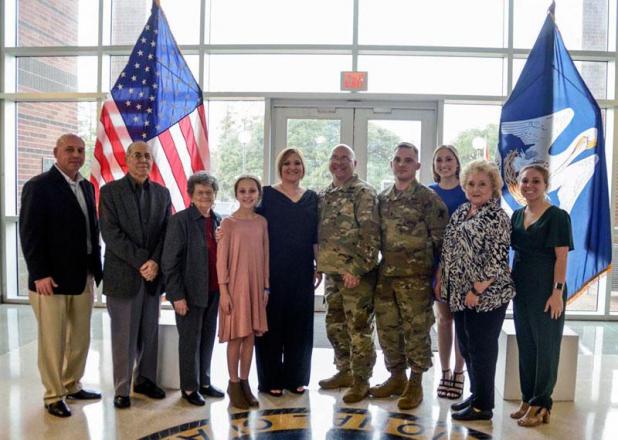 PINEVILLE – Surrounded by friends, family and colleagues, the Louisiana National Guard promoted James Williams, Jr. to the rank of lieutenant colonel at Camp Beauregard in Pineville, Dec. 18.
Williams is a long-time Vermilion Parish resident. He lives in Meaux with his family. He and his wife, the former Toni Lege have been married for 24 years. Together they have four children, James (III) who also serves in the LANG, Caroline, Ann Claire and Emma.
“I remember when I first met Lt. Col. Williams in 1997. He was a young E-5 not long off active duty, and I decided to make him a platoon leader as an E-5. The one thing I noticed about him was that he was always smiling and he led his Soldiers from the front the entire time,” said Maj. Gen. Glenn H. Curtis,
adjutant general of the LANG. “He’s always been one of the leaders we’ve depended on, and I want to congratulate you on [your promotion] today.”
Originally from Violet, Williams holds a Bachelor of Science in Industrial Technology from the University of Louisiana at Lafayette. He was commissioned in 1998 as a second lieutenant in the Corps of Engineers through the direct commission program.
Williams initially enlisted as an active duty Soldier and served with the 82nd Airborne Division’s 307th Engineer Battalion. In 1997, he joined the Louisiana National Guard, where he served in the 1088th Engineer Battalion; 2nd and 3rd Battalions of the 256th Infantry Brigade Combat Team; Recruiting and Retention Command; and the 199th Regional Training Institute. Williams has deployed in support of Operation Iraqi Freedom (III), Operation Iraqi Freedom (X) and Operation New Dawn.
“Maj. Gen. Curtis, 20 years ago you were there for my first promotion as my battalion commander, and should this be my last, I cannot think of anyone else that I would want to be here,” said Williams. “From you I’ve borrowed the appreciation of the American Soldier, and that, no matter where you go, to always be grateful for those that serve with you.”
He has served in numerous positions throughout his career including platoon leader, company executive officer, company commander, assistant brigade engineer, logistics officer, battalion operations officer, battalion executive officer, and currently serves as the deputy commander of the 199th Regiment, (Regional Training Institute).
Williams’ military education includes the Primary Leadership Development Course, Engineer Officer Basic and Advanced Course, the Support Operations Course, Command and General Staff College Intermediate Level Education course, Basic Airborne and Advanced Airborne School, and the Sapper Leader Course.
His awards include: Bronze Star, Meritorious Service Medal with oak leaf cluster, Army Commendation Medal with silver oak leaf cluster, Army Achievement Medal with silver and bronze oak leaf clusters, Army Good Conduct Medal, Army Reserve Component Medal with bronze oak leaf cluster, National Defense Service Medal with Bronze oak leaf cluster, Humanitarian Service Medal with bronze oak leaf cluster), Noncommissioned Officer Professional Development Ribbon, Armed Forces Reserve Medal with “M” device, Global War on Terrorism Service Ribbon, Iraqi Campaign Medal, Army Reserve Component Overseas Service Ribbon Overseas Service Ribbon, Army Service Ribbon, Louisiana Cross of Merit, Louisiana War Cross, Louisiana Emergency Service Ribbon with silver Fleur-de-lis, Louisiana Longevity Medal with three Fleur-de-lis, Meritorious Unit Commendation, German Armed Forces Proficiency Badge, the bronze De Fleury Medal, Senior Parachutist Badge Combat Action Badge and the Sapper Tab.
“I just want to thank everybody that was here with me today, and I cannot express my appreciation enough to all of you,” said Williams. “There are many that I have served with that have in some way, shape or form influenced my career and for that I’m grateful.”
“Toni, we started this journey a long, long time ago; when I wanted to enlist into the Army you had no idea of what you were getting into and neither did I,” said Williams. “You’ve stood by me through it all: hurricanes, floods, loss of a home and deployments. You’ve been there through the thick and thin, good times and bad and I could not be here without your love and support.”