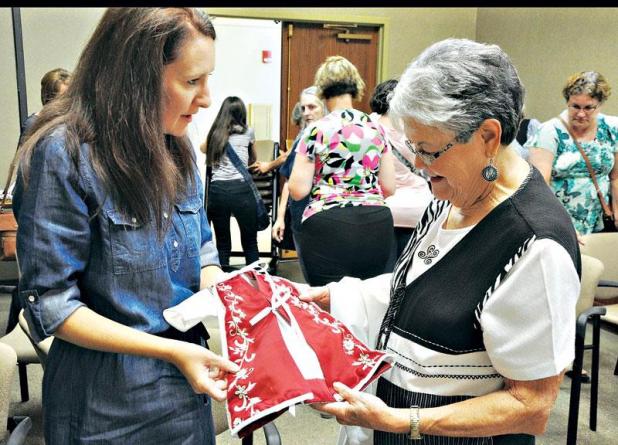 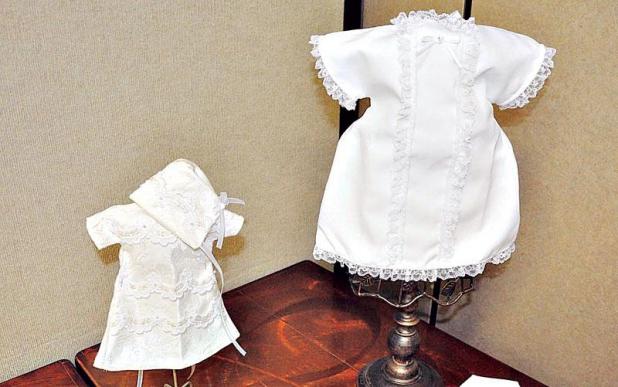 These are two finished gowns created from wedding dresses. 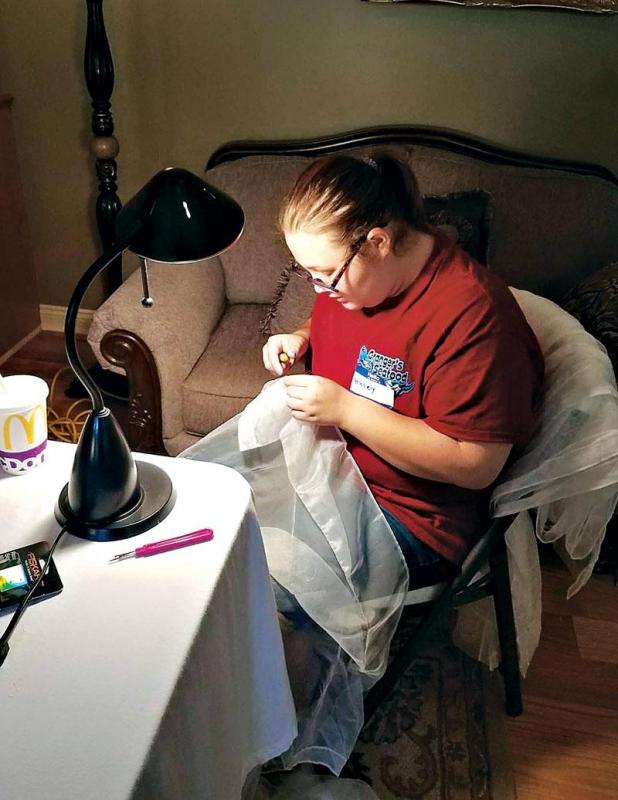 It takes special people to want to volunteer their time to create something that touches and helps heal a  heart of a broken family.
There are 40 to 50 ladies from Acadiana, who have joined forces to create “Steps to Heaven.”
These ladies, ages 18 to 81, spend hours and hours transforming wedding dresses, prom dresses, and baptism dresses into  burial remembrances for families who have lost an infant through a miscarriage, still birth or infant death.
They turn the dresses into burial gowns, pocket blankets, and keepsake pillows free of charge. They also sew day gowns  to be worn by premature infants who are in NICU. The day gowns are assembled by Velcro.
One wedding dress has enough fabric to create at least 10 burial gowns.
The group provides at least 50 gown sets which includes the gown, bonnet, a keepsake pillow and Holy Land Stone angel or a pocket blanket set with keepsake pillows and Holy Land Stone angels to Abbeville General and Women’s and Children’s Hospital a month.
Each part of the team has a different role to play in creating a gown. There are some who are in charge of collecting dresses, while there are others who are called “rippers.” They are handed a wedding gown and they have the task of ripping apart the seams and disassembling the dress. Once it is no longer a dress, then the material is handed down to a seamstress. The seamstress is the person who creates the burial dresses.
It could take anywhere from two hours to eight hours to sew one dress.
Gaynell Breaux of Mire is a seamstress, who enjoys working with color.   She volunteers her time to this project because it touches home.
“I lost a grandbaby,” said Breaux. “She lived two hours and 15 minutes.  My daughter is so excited right now because of what I am doing.”
After her daughter’s baby passed away, an elderly lady gave her daughter some knitted clothes so she had something to remember her daughter, Macy, with. Today, she still has the knitted clothes.
“I do it in memory of Macy,” Breaux said.
Steps to Heaven  began small by former Vermilion Parish teacher Phyllis Berberich. Berberich, who taught for 33 years,  began sewing infant burial gowns from a bridal gown donated by LeBlanc Elementary School’s faculty.
In March of 2017, Berberich began the Cuddle Program at Women’s & Children’s Hospital where she discovered how great of a need there was in Acadiana for helping FAMILIES IN CRISIS. Since then, the organization has really grown. Thanks to the Internet, information about this organization has spread quickly.
Over the last four months, bridal dresses from throughout the United States have been arriving at her house. She has at least 50 bridal gowns on standby. That’s enough to create more than 500 burial gowns and/or pocket blankets.  In the last four months,  around 100 bridal gowns have been donated.
“The community has been so overwhelming and supportive in donating,” said Berberich.
Once a month, the group meets at Berberich’s house. Some bring their sewing machine, while others bring their items to rip dresses or crochet needles and yarn to crochet pocket blankets and keepsake pillows.
When the gowns and other items are completed, someone delivers them to the hospitals.
“We just know we are touching families,” she said.
Billie Joe Broussard, who lives in Abbeville, heard about the organization while attending a Catholic Daughter’s meeting.
“It is close to my heart because we had our fourth grandchild born that morning (of the meeting),” said Broussard.  “I knew I wanted to get involved.  I cannot sew, therefore what can I do?”
She became a ripper.
“Giving back is what I wanted to do,” Broussard added. “Having healthy grandchildren, makes me blessed.”
Berberich held a meeting in the Abbeville library on Thursday to educate potential new volunteers and go over other wants and needs of Steps to Heaven.
The group welcomes other donations:
• Ziploc bags for supplies and delivery to local hospitals
• Thread for sewing
• Velcro strips
• Pastel and white colored batiste fabric for burial gowns
• 100 percent cotton infant print fabric for day gowns
• Sewing machine needles
• Financial donations
* Memorial Holy Land Stone Angels