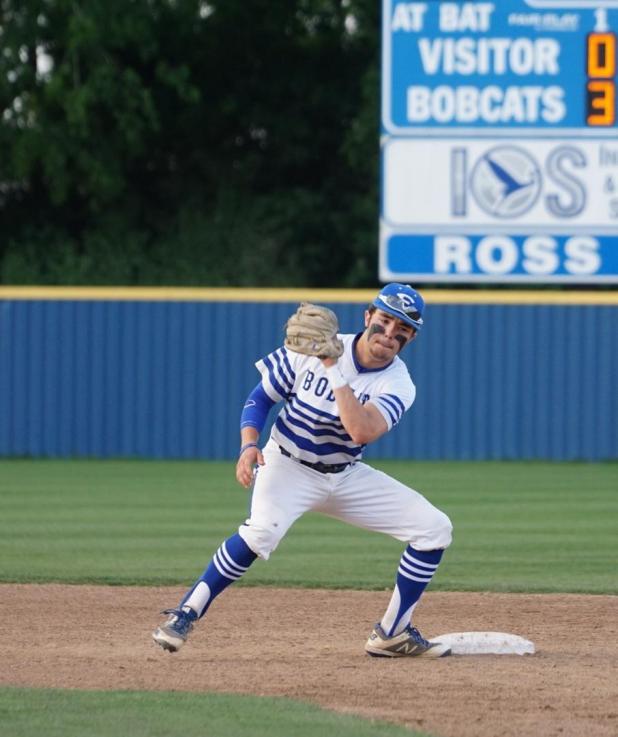 JT Langlinais gets ready to tag an Abbeville player at second base.

The Erath Bobcats have now won seven straight games after sweeping Abbeville.
The Bobcats improved to 23-4 overall and 9-1 in district.
They are also ranked No. 3 in the Class 3A power rankings.
Erath steps out of district on Monday to battle VC. Then they close out district this week with games against Kaplan.

The Bobcats cruised to an easy victory over Abbeville 14-1 on Friday in Abbeville.
Erath fired up the offense in the first inning, when Parker Bourque singled on a 0-2 count, scoring two runs.
Erath notched six runs in the sixth inning.
Erath batters contributing to the big inning included Dax Hoffpauir, Lane Toups, and JT Langlinais, who each had RBIs in the inning.
Hoffpauir led the Bobcats to victory on the mound. He surrendered one run on two hits over five innings, striking out 12 and walking one. Ryan Richard threw one inning in relief out of the bullpen.
Caleb N. took the loss for Abbeville. He went five and a third innings, allowing ten runs on 12 hits and striking out six.
Chad Celestine, Ty G. and Caleb had hits for AHS.
Erath racked up 13 hits.
Lane Toups, Jakob Sanfilippo, Andre Toups, and Hoffpauir all managed multiple hits for Erath.
Lane Toups led Erath with three hits in three at bats. One of his hits was a triple.

ERATH - On Thursday, the Bobcats scored 13 runs in the first inning en route to a 18-2 win over Abbeville 18-2.
Erath’s offense in the inning was led by Jaiden Lebouef, Andre Toups, Dillon Domingue, Andrew Sonnier, Parker Bourque, and Lebouef, all driving in runs in the inning.
Bourque pitched Erath to victory. He lasted four innings, allowing two hits and two runs while striking out ten and walking one. Lebouef threw one inning in relief out of the bullpen.
K. Patal took the loss for Abbeville. He went four innings, allowing 18 runs on ten hits and striking out two.
Erath’s Luke Frederick went yard in the first inning.
Erath totaled 10 hits. Frederick, Domingues, and Sonnier each managed two hits to lead Erath.