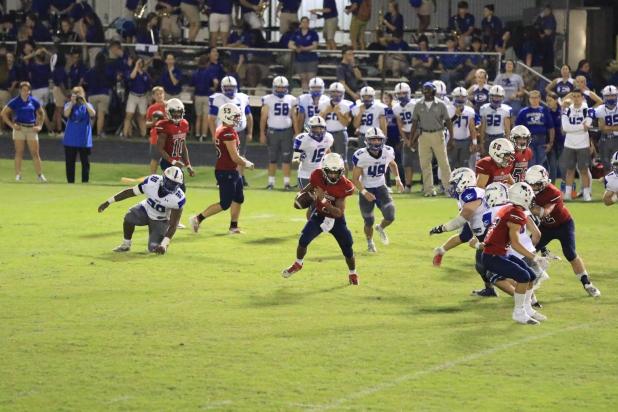 Special to The Meridional

LEROY – They may be in different classes and districts now, but the North Vermilion Patriots and Erath Bobcats still bring plenty of emotion when they meet.
That was true Friday night at NVHS, as the host Patriots withstood a second-half rally to hold off the Bobcats 34-27 and improve to 3-1 in their first year in Class 4A.
The Patriots made plenty of mistakes, perhaps dwelling on the previous week’s rousing overtime win at Ascension Episcopal. But Erath matched most of those miscues with errors of their own.
It was not a sharp showing by either side, but it was entertaining.
“This is my third year here, and we had never beaten Ascension until last week,’ said NVHS coach Brett Blakey. “That started to give us some confidence. But I told the team that win would have meant nothing if we had lost tonight.
“Instead of 3-1 with something to shoot for, we would have been back at 2-2. But we took the opportunity and ran with it.”
“It’s hard to find a lot that’s good from this game,” Bobcats coach Eric LeBlanc said. “But, congratulations to Norh Vermilion. They beat us. They made the plays they needed to make.”
‘Hat’s off to Erath,” Blakey said. “They were tied with us, scored twice after half to tie us. They have a good team. It was an entertaining game.”
It was a game that wasn’t decided until Patriots quarterback Darius Gilliam picked up a clinching first down with a minute to go.
It was Gilliam who scored the winning touchdown on a 10-yard run with 28 seconds left in the third quarter after the Bobcats had rallied from a 20-14 halftime deficit to force a 27-27 tie.

It was also Gilliam who, with a 34-27 lead and second down at the EHS 41, forced an ill-advised pitchout that was claimed by the Bobcats with 2:10 remaining.

“Darius plays his tail off every game, evey play,” Blakey said. “He had a (similar) pitch against Abbeville that went for a 70-yard touchdown. You can’t get mad at him. You just have to talk to him. It’s a learning experience.”

Given a shot for another score, the Bobcats suffered two straight calamitous center snaps to Luke LeBlanc for losses of 5 and 10 yards. Eventually EHS had to punt.
It was that kind of night. Execution could not hope to match emotions for the two old rivals. North Vermilion has moved up to Class 4A now, while Erath remains in District 8-3A, but the rivalry still runs deep.
Kendrick Baudoin opened the scoring with a 28-yard run for a 7-0 Patriots lead, but a 3-yard scamper around end by LeBlanc knotted it at 7 apiece. LeBlanc set sail on a 78-yard run to the NVHS 6 just one snap after the kickoff to set up the score.
Baudoin sped in from 39 yards for 14-7, but LeBlanc’s 14-yard score knotted things at 14 with 4:09 left in the half.
Then EHS fullback Jax Thibodeaux, fighting for extra yardage with a pass from LeBlanc, fumbled it away with 1:41 left until halftime.
Gilliam took advantage with a 9-yard run and 20-14 lead at the break.
He stretched the lead to 27-14 with a 40-yard run in the third, only to see the visitors strike back.
First, Thibodeaux plowed through the defense from 7 yards out, Then Thibodeaux struck from the 11 to tie it at 27 at 4:58 in the third.
The Patriots had one more card to play, and they made it work.
“This came down to us just doing our jobs,” Blakey said. “Like (New England coach) Bill Belichick says, ‘Just do your job.’ I’m proud of our team. For as many mistakes as we made, we never quit.”