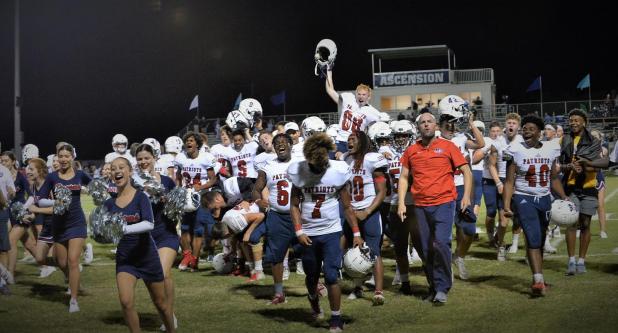 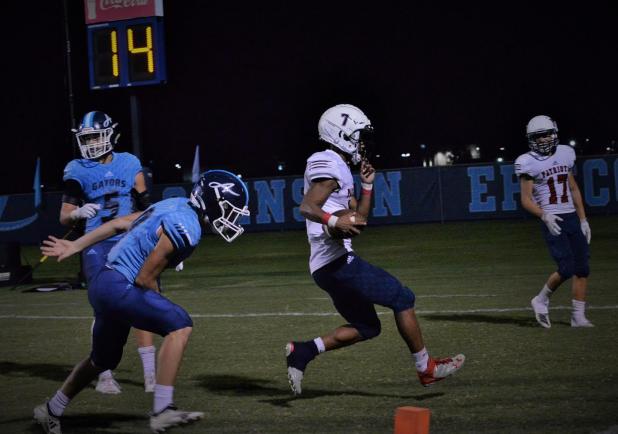 Special to The Meridional

YOUNGSVILLE – What a difference a year can make.
Last season, the North Vermilion Patriots came out on the short end of an overtime battle – one solitary point – to the Ascension Episcopal Blue Gators. It was emblematic of a season that didn't live up to expectations.
But on Friday night at AES, the visitors turned the script on its ear.
Senior quarterback Darius Gilliam stung the Gators with a 10-yard score on the first play of overtime. Patrick Chapman made the extra point, and the NVHS defense stopped a two-point try by AES to secure a memorable 23-22 win.

“This was a testament to effort,” NV coach Brett Blakey said. “To putting the work in.
To coming in three times a week in the summer and sacrificing two hours away from home to get better.
“It was a fun game that went back and forth between two good teams. It's what it's all about. I love playing in games like this. They make you better.”
The Patriots won by shutting out the Gators in second half regular time, rallying from 16-7 down at halftime to force a 16-16 deadlock.
They won despite having one field goal squashed by a bad snap to holder Noah LeBlanc with 5:55 to play in a tie game.
They survived a second potentially deadly blow when a point blank field goal was blocked by the Gators in the final 4 econds of regulation.
They did the kind of things winning teams have to do in crunch time.
They also won because Ascension Episcopal saw a fumble go through the end zone and out of bounds for a touchback instead of increasing a 16-13 third period lead.
“Give them credit,” AES coach Matt Desormeaux said. “They played hard and made the plays they needed to make. We didn't play very clean. There was the fumble, and we made to many mistakes, costly penalties that set us back.”
But, make no mistake, the Patriots earned the win.
Gilliam was brilliant. He ran 22 times for 117 yards including a 2-yarder for NVHS's first score and the winning 10-yarder.
“That touchdown run in overtime was special,” Blakey said.
Gilliam also hit 11-of-12 passes, barely missing just once, for 155 yards and a 38-yard score to Zack Necaise.
“We moved Zack from outside to inside receiver this week, and he came up with a huge game for us,” said Blakey.
AES moved effectively on the ground when it avoided penalties – especially Asa Freeman, who powered his way to 197 yards on 22 carries, mainly between the tackles.

“We like the inside running game,” Desormeaux said, “and Asa did a good job.”
The Gators used a 19-yard punt return by Andrew Stolzenthaler to set up a 25-yard drive to 7-0 on a 6-yard run by Cole Simon. NVHS tied it at 7 on Gilliam's first score.
Jaime Cordova's 22-yard thrust gave AES a 13-7 lead, and a drive before halftime was capped by freshman Peyton Woodring's 33-yard field goal for a 16-7 lead at the break.
But NV proved resilient, as Necaise eluded defenders for a 38-yard score to close within 16-13 on the first possession of the third quarter.
A goalline hit on Cordova transformed a TD into a touchback, inspiring a tying drive with Chapman's 28-yard field goal.
NVHS's two blunted field goal tries followed, leading to overtime.
Once there, Gilliam turned up the heat with his 10-yarder. Simon responded by hitting a fourth down pass that Matt Remondet brought in with a circus catch for a 4-yard score.
That set the stage for the final drama, as Simon was swarmed on a keeper.
“I had the tight end on the play.” Noah LeBlanc said. “I was supposed to cover him if he went out. But he didn't go out, so I got in on the tackle.”
“We'll always fight to the end,” Gilliam said. “This was a real test for us. This was a different week for us. This opens things up.”