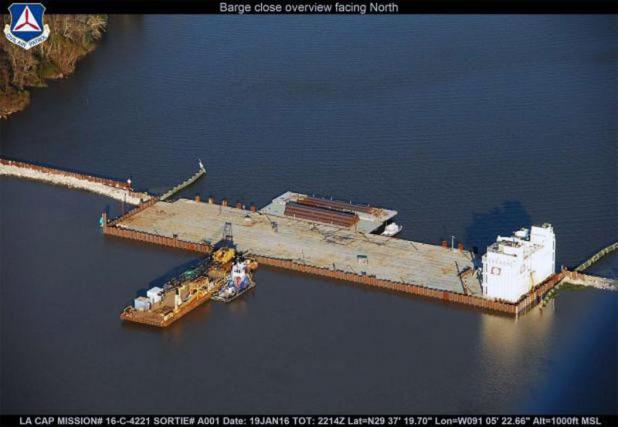 This barge was sunk in Bayou Chene during the 2016 high-water event, the third of four times the technique was used to prevent back-flooding in St. Mary, Lower St. Martin and surrounding parishes. Construction officially began Monday on an $80 million permanent structure that will eliminate the need for sinking barges in the bayou.
St. Mary Levee District Photo

Construction is now underway on components of a permanent floodgate on Bayou Chene below Morgan City that will provide flood protection for portions of six parishes," the Governor's Office said Monday.
The Coastal Protection and Restoration Authority and St. Mary Parish Levee District are overseeing construction of the automated barge floodgate. CPRA is directing $80 million from the Gulf of Mexico Energy Security Act to fund the project.
“The value of this flood protection structure to the region was demonstrated last year during a historic period of extended high water along the Atchafalaya River that coincided with Hurricane Barry’s landfall just west of the permanent floodgate site,” said Gov. John Bel Edwards. “Thankfully, sinking barges has been successful, but it is a costly and short-term approach. This permanent structure will provide a reliable, long-term solution for the people and businesses in this area. We know this project is important and we are doing our best to compress the timeline to get this structure in place as soon as possible.”
During high water events on the Atchafalaya River, Bayou Chene has been a major conduit for backwater flooding in the parishes of St. Mary, Terrebonne, Lafourche, St. Martin, Assumption, and Iberville. The governor announced funding for the permanent structure in March 2019, but before the project could commence, another high water event coupled with the anticipated opening of the Morganza Floodway triggered the emergency sinking of a barge closure, a temporary structure that was also used during high river events in 1973, 2011, and 2016.
“Major construction is now underway on this project that will provide protection to over 100,000 residents in a six-parish region with the push of a button.” said CPRA Board Chairman Chip Kline. “This proven concept will soon become a permanent flood protection structure that will protect the people, places, and businesses that rely on this critical line of defense during high water events and storms.”
“The St. Mary Levee District has been working to implement a permanent solution since the historic 2011 flood, and we are excited that with this funding from the State of Louisiana we can finally implement this vital regional project,” said Levee District Executive Director Tim Matte. “The permanent Bayou Chene Floodgate will protect the citizens and property owners of six parishes,and will significantly reduce the annual costs incurred in emergency flood fighting throughout the region.”
“For nearly a decade, the fight for a permanent structure on Bayou Chene has been at the forefront of my efforts in the State Senate. Because of its proven success over many flood fights, we worked with CPRA and the St. Mary Levee District to secure funding for this project to ensure what we knew all along—that this project is vital to the protection of countless homes and businesses in District 21 and our surrounding areas,” said state Senator Bret Allain, R-Franklin. “With our flood fights becoming a more regular occurrence, the funding and construction of this project has never been more urgent, and I look forward to it being operational next year."
"I'm very enthusiastic about the continued work on the $80 Million Bayou Chene Flood Gate which will help reduce backwater flooding from the Atchafalaya due to high water events on the Mississippi as well as hurricanes and tropical storms,” said state Rep. Vinney St. Blanc, R-Franklin. “This will not only help mitigate flood risks within my District of St. Mary and Lower St. Martin, but neighboring parishes as well."
The project was designed by several Louisiana-based engineering firms. APTIM Environmental & Infrastructure led the project with support from T. Baker Smith, Miller Engineers and Associates, and Eustis Engineering.
The area where the 403 foot floodgate will be located is currently being dredged and is expected to be completed by mid-September. Thibodaux-based Sealevel Construction, Inc. will fabricate and install the structure. The floodgate is currently being fabricated at Bollinger Shipyard in Amelia. The floodgate and remaining components of the project, including road improvements, armored earthen levee, and a weir structure are all expected to be complete and operational by September 2021