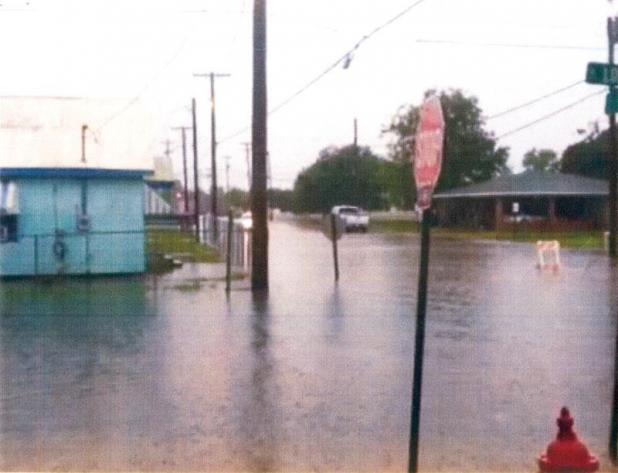 The intersection of Lafayette Street and South Louisiana Street has had drainage issues for many years. The city will be making improvements in that area after receiving capital outlay funds from the state.

Here’s some good news.
Long-awaited capital outlay funds from the state have finally come through for the City of Abbeville. These are funds that will help cover the cost of four drainage projects in the city.
The total cost of the projects will be $500,000. The city will receive $375,000 from the state, with the city covering the remaining $125,000.
“You can’t say enough about the positive impact this is going to have for so many people,” Councilman Brady Broussard Jr. said during the Council meeting on Aug 6. “This is fantastic for our city.”
City Engineer Richard Primeaux said the work would take place in four different areas of the city.
One will be in the Riverside subdivision, around 2nd Street. Primeaux said the flow in the canal near 2nd Street would improve, and accept drainage from the whole area. There are also disconnected drainage structures that do not allow water to leave. Primeaux said those would be improved to get the water to the outfall.
“We also looked at the channel,” Primeaux said. “It could be reshaped and recleaned. We are going to try to work with the drainage board on that one.”
Another of the four projects will be at the intersection of Lafayette Street and South Louisiana Street.
“That will help out considerably in that area,” Primeaux said. “You have a lot of water coming down to that one intersection, from about an eight-block area.”
Primeaux said undersized pipes will be replaced to help flow to the outfall in that area.
“That leads to the detention pond near Lafitte Park,” Primeaux said. “That is making use of a previous drainage project that you have done.
“This will help because there are some businesses in that area that have flooded.”
Work will also be done in the Robert Wells Drive and Wildcat Drive area. That area includes Harvest Time Church and school, as well as an apartment complex.
“When it rains,” Primeaux said, “sometimes they can’t get in and out of those apartments. It also affects the church and school.”
Primeaux said a nearby channel is largely the cause.
“We are going to work with the drainage board there,” Primeaux said. “We may need some easements. We need to get the water from Robert Wells into that channel. Right now, you can’t even get the water to that channel.
“We may have to do some sub-surface drainage to get it there.”
The final project will be done in the South Cedar Street area, which has a nearby channel.
“Under a different drainage project for the (Vermilion Parish Police Jury),” Primeaux said, “there is a levee protection system on their side. The north side has no protection at all, when that channel backs up.
“We are going to work with the drainage board to put a protection levee. We will also put some pipes to help drainage go through.”
Primeaux said bids should go out sometime in September. He said the hopeful time-line is construction starting in October, with the projects being completed by March of 2020, if not earlier.
“The projects are designed,” Primeaux said. “We just need to get some construction data put together. “The projects are not complicated in nature, but they are beneficial.”
Mayor Mark Piazza said Sen. Bob Hensgens and Rep. Ryan Bourriaque were helpful in obtaining the capital outlay funds this year.
“They were both instrumental,” Piazza said.
Bourriaque attended the council meeting on Aug. 6. He said he was happy to be able to help in this process, a process that he joined after winning a special election in February for the District 47 seat, not long before the start of this year’s regular legislative session.
“I was fortunate enough right off the bat to be put on some committees that I thought could help the district and this city,” Bourriaque said. “One of those was Ways and Means, which we know is where the capital outlay program begins.
“We were fortunate enough to move one of your projects through the process.”
Councilman Francis Plaisance thanked Bourriaque, because this process has been a long one.
“I want to thank you for what you have done for us with this drainage project,” Plaisance said. “It has been more than 10 years since we first requested.”
Broussard reiterated an earlier sentiment while thanking Bourriaque.
“It is four different areas of Abbeville you have directly assisted in drainage improvements,” Councilman Brady Broussard Jr. said. “You can’t say enough about how much that will help citizens of this city.”